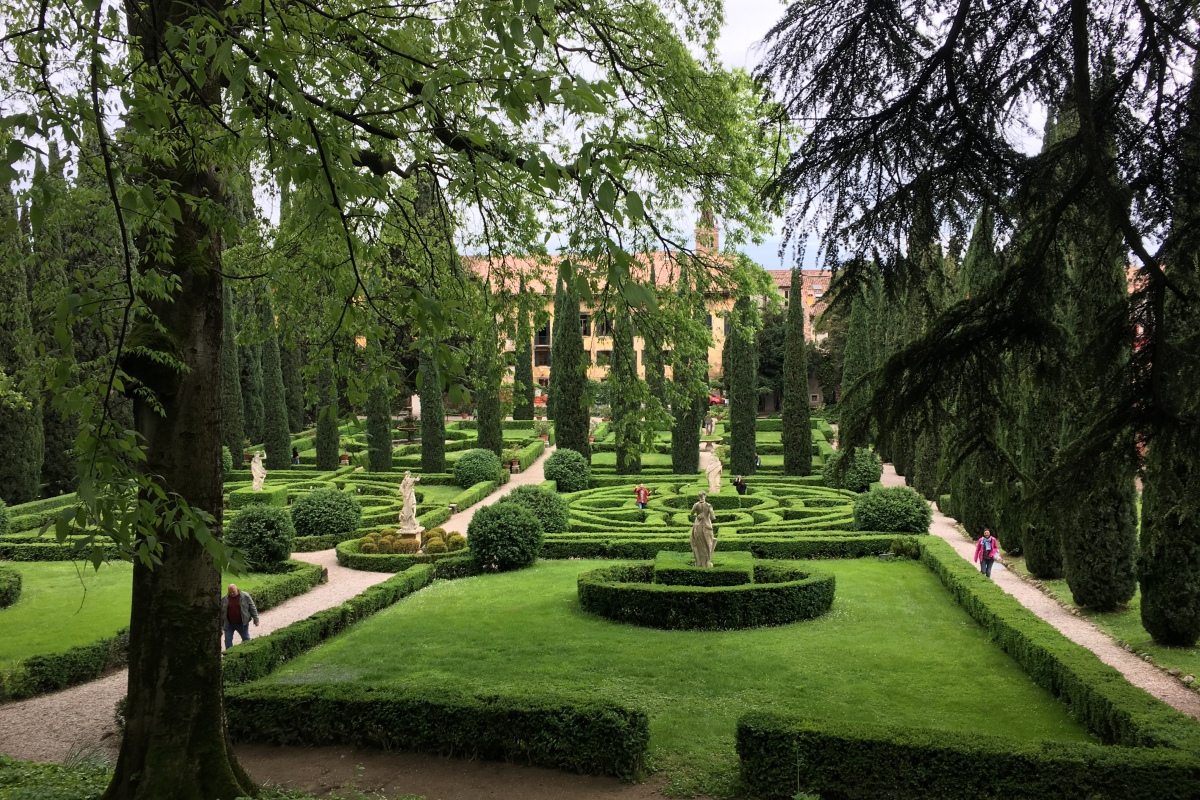 Iffy weather forecast today, we dithered over breakfast, grabbed our umbrellas and struck out for the Roman Amphitheater and Giusti Palace and Gardens.

Crossing the Roman bridge again we turned southeast towards the Roman Amphitheater, which we discovered doesn’t open until 1:30 pm on Mondays. It was only 10:00 am and we decided to walk on to the Palace and Gardens. They were open and we started our exploration in the magnificent gardens. Not a lot of tourists and plenty of sweet birdsong. The photo is of Bacchus found in a niche on the way to the upper levels of this terraced Renaissance garden planted in 1580. 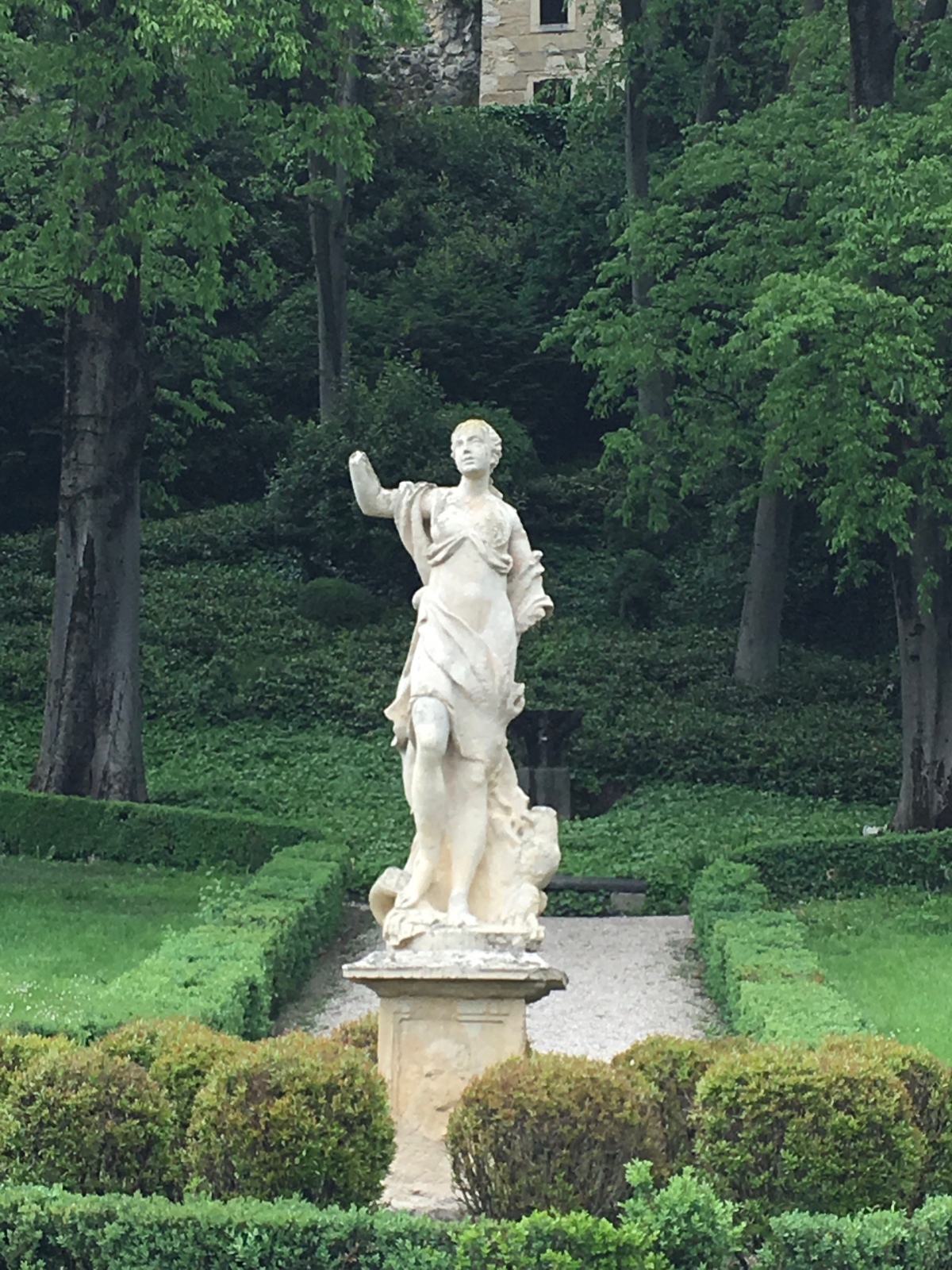 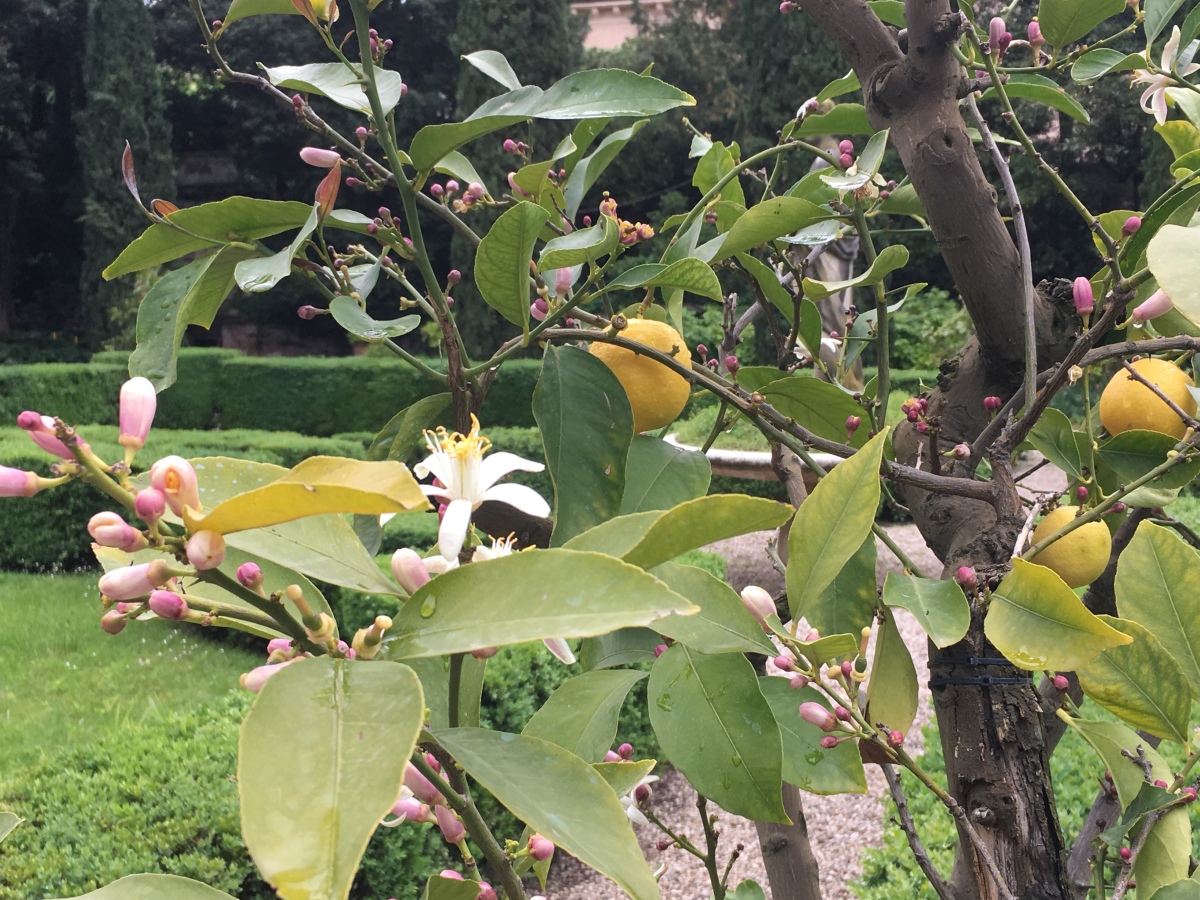 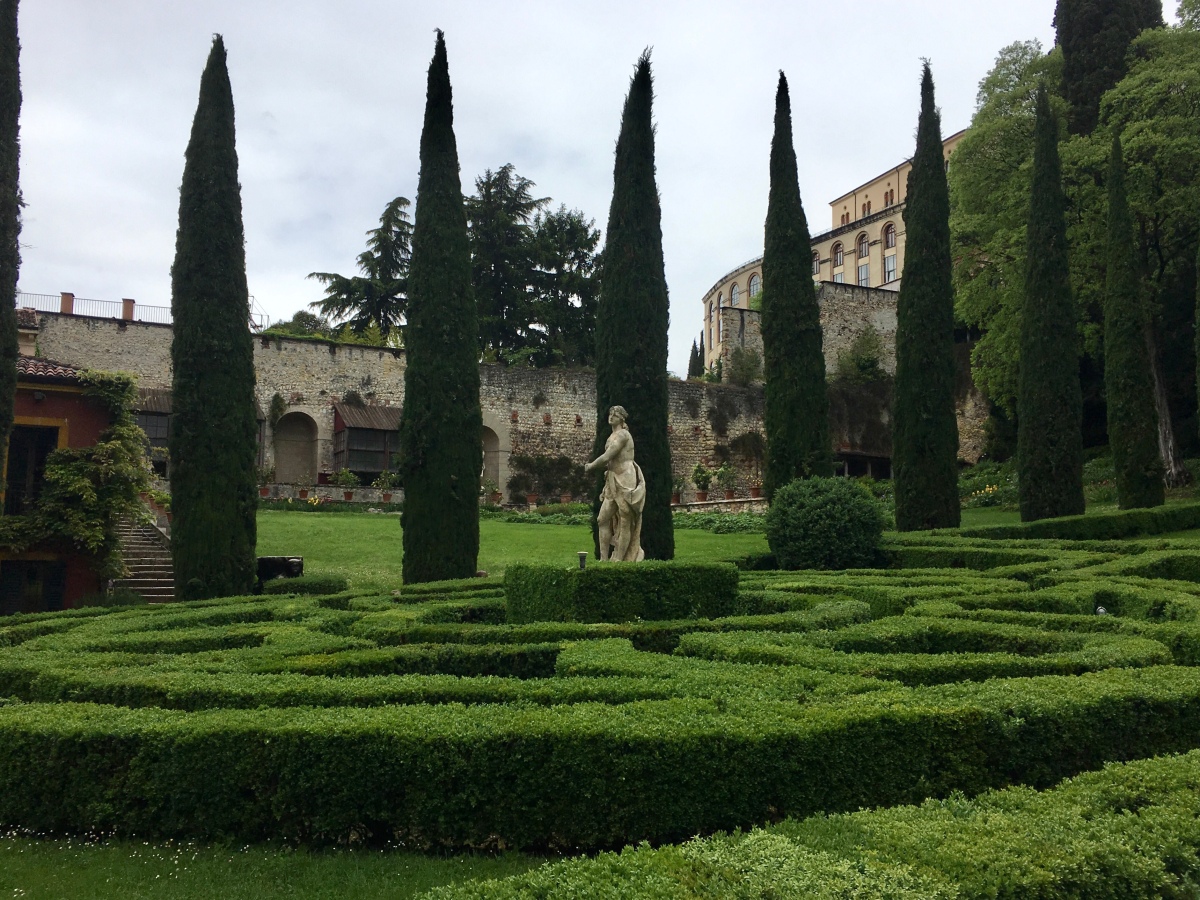 The garden is considered one of the finest of it’s kind, featuring fountains, acoustic caves, pergolas, Italian-style boxwood, mythological statues and a small labyrinth*. Instead of the Palace being on the summit in the typical style, the garden terraces to the summit with the Palace below. 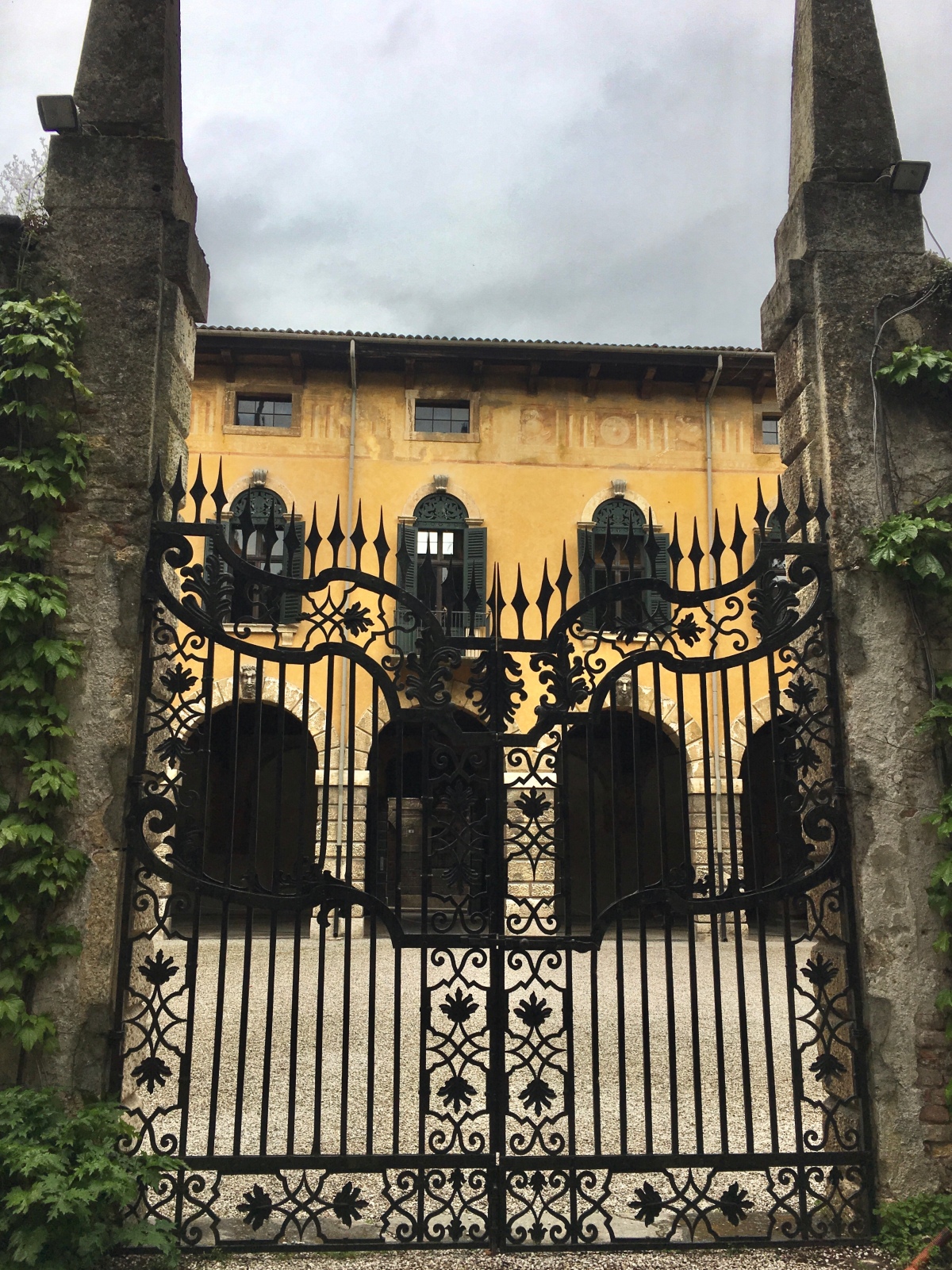 This photo is of the “belvedere” that is at the summit of the hill. It is the upper terrace with the gargoyle underneath.

Suzanne found an interesting Italian snail on a bench. It was probably about an inch and a half in length. I really thought it had a pretty shell. Much more colorful than what we find in the Pacific NW.

Here’s Suzanne in the maze, she of course walked right to the center, while I took the road less traveled. That brilliant decision resulted in Suzanne having to point the way out for me. And I need to let you know that some of the photos in the previous entries were courtesy of Suzanne. I get so focused on writing that I keep forgetting to give credit where it is due. 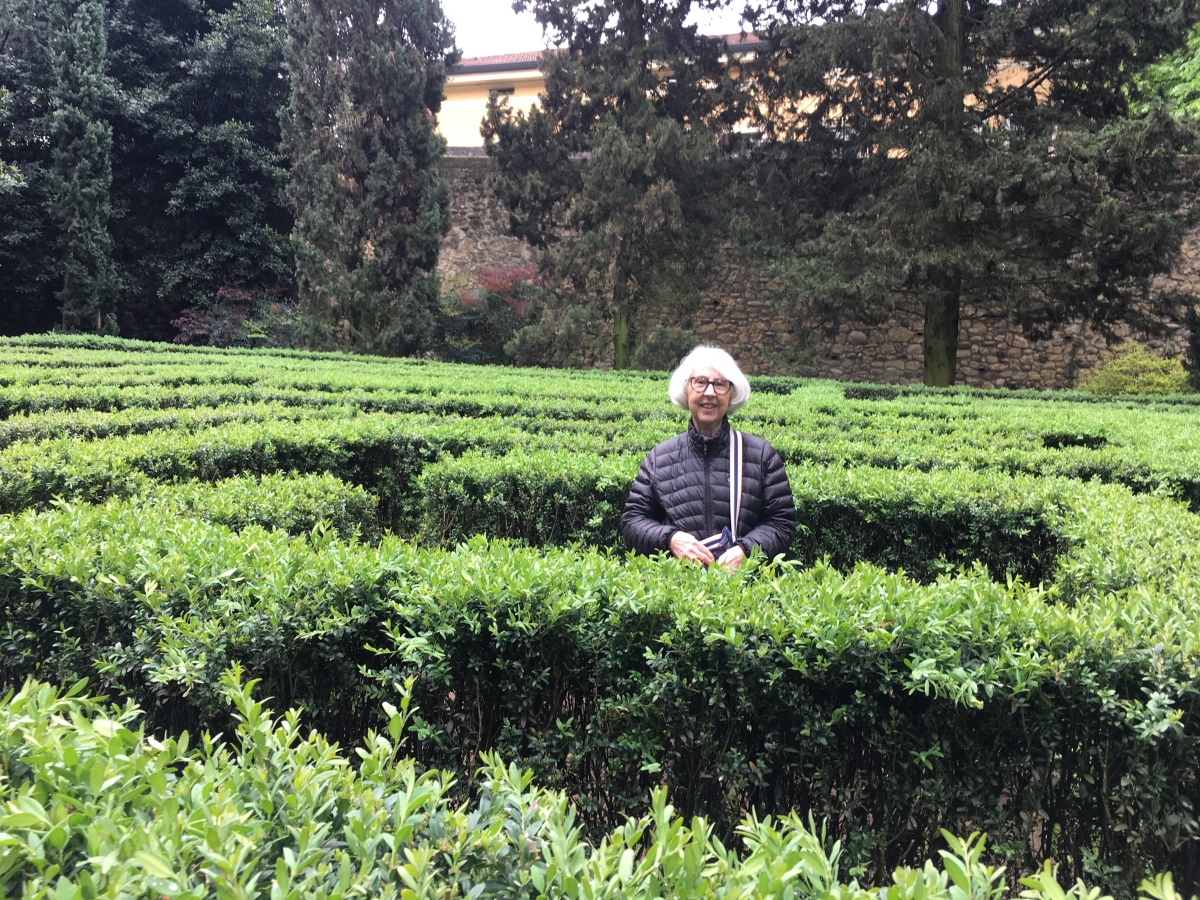 The palace is a 16th-century Mannerist structure. The gardens and palace were designed by Agostino Giusti, a Venetian knight and squire of the grand duchy of Tuscany*. The family moved from Florence to Verona and like any Florentine noble Agostino wanted his own small Boboli garden*. The 20 heirs to the Giusti Palace and gardens placed the property on the market in 2005, after years of squabbling since the death of it’s owner Justo Giusti, an Italian diplomat. The family still retains the property*.

Photo of a photo depicting a Giusti ball. 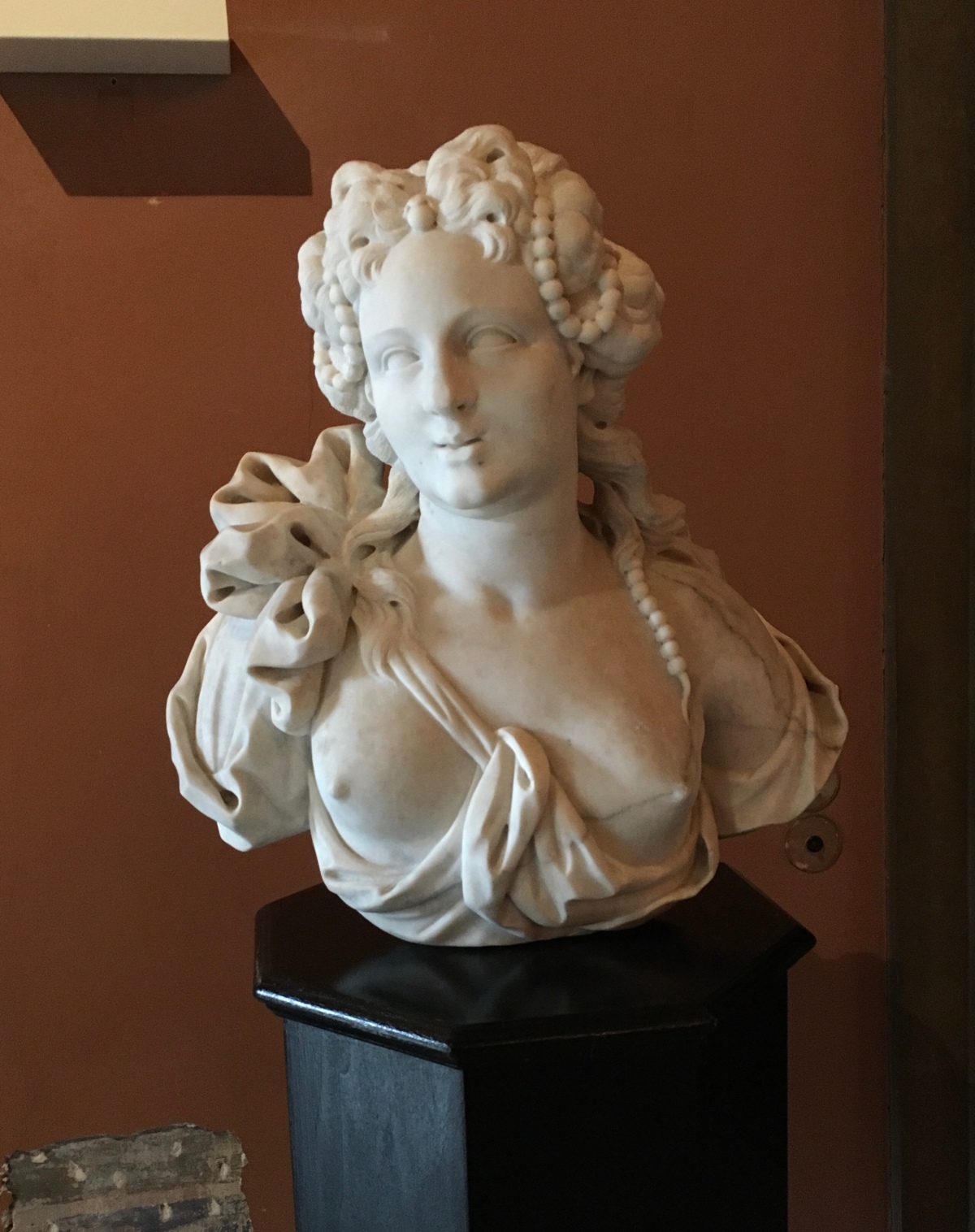 The inlaid wood floors with corner ceiling and wall paintings. 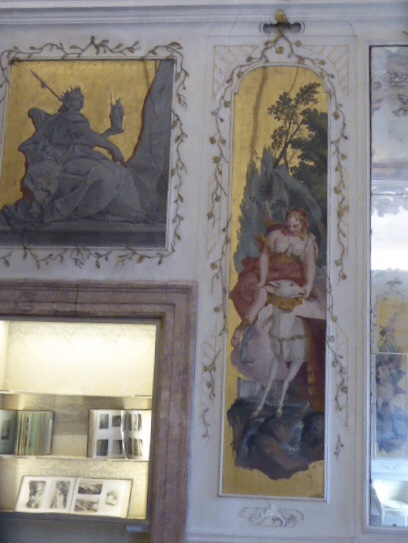 So having climbed many hillside paths and steps we started back to see if the Amphitheater and Museum had opened yet. No, we were still early, so were forced to find a Cappuccino to while away the time. Finally we were able to enter and found an Amphitheater that is still in use. Part modern seating, part ancient Roman and part repaired Roman. Plus there was a museum, you’ve got it….up 7 steep, high flights of stairs. I’m not sure why they made the steps so high. 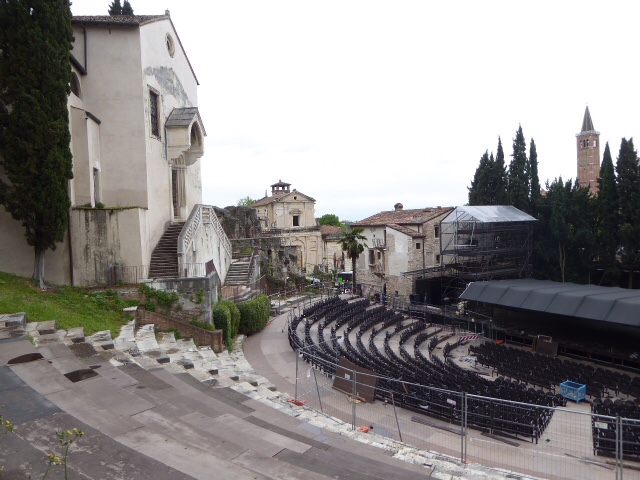 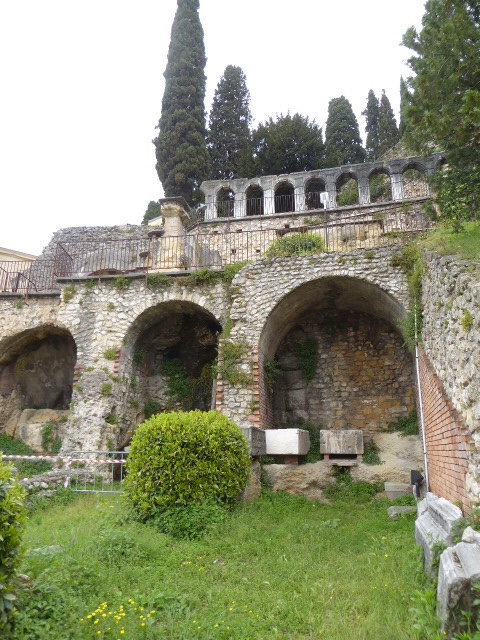 A piece of mosaic flooring from an Roman palace. The city was founded in the 1st century BC when it became a Roman municipium and rose rapidly in importance*. The city is a UNESCO world heritage site with one of the richest collections of Roman remains in Northern Italy*.

Famished at 3:15 pm, we finally made it back to our favorite lunch spot.

Yummy tuna salad with pears, absolutely one of the best salads ever. Suzanne and I both love this dish.

Beautiful little balcony garden and florist shop we saw on our evening perambulation. 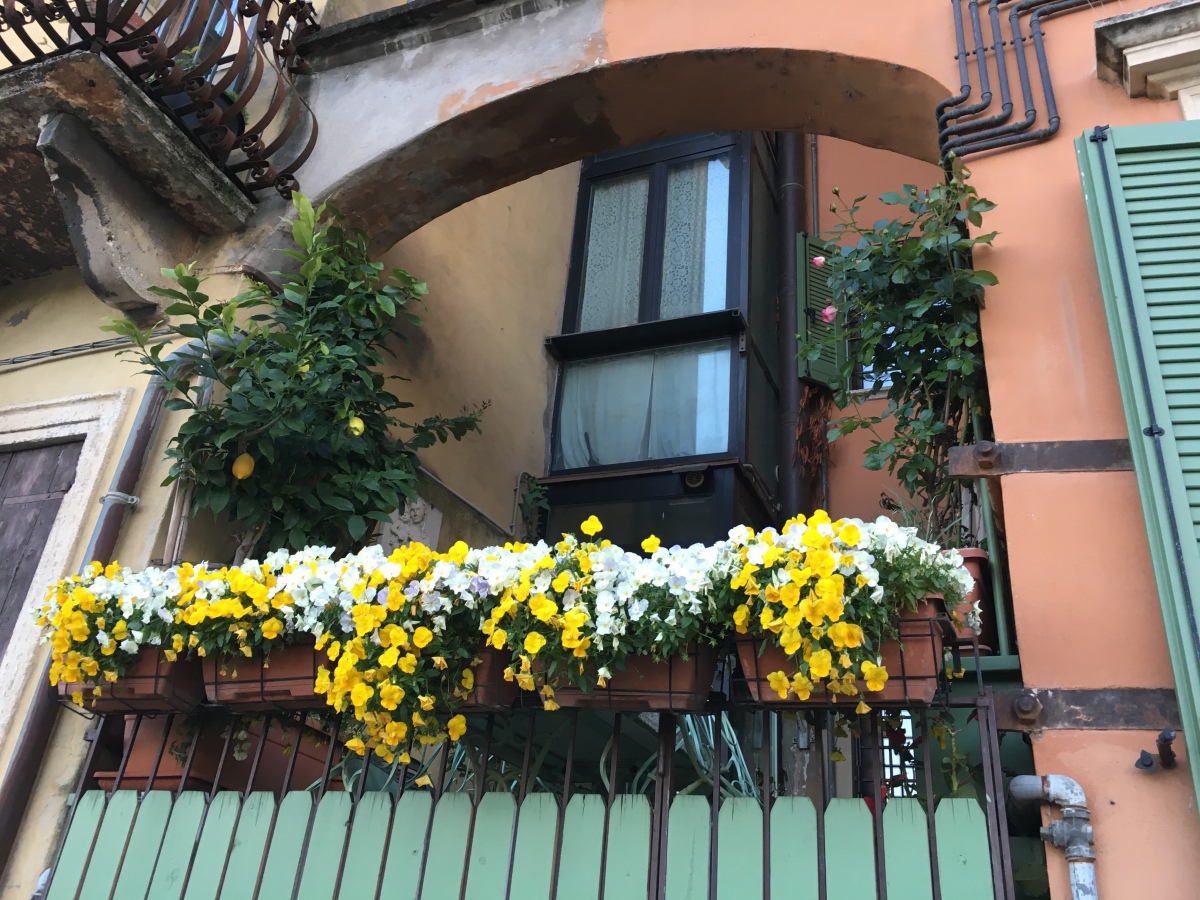 *Agostino Giusti and heirs, The Guardian