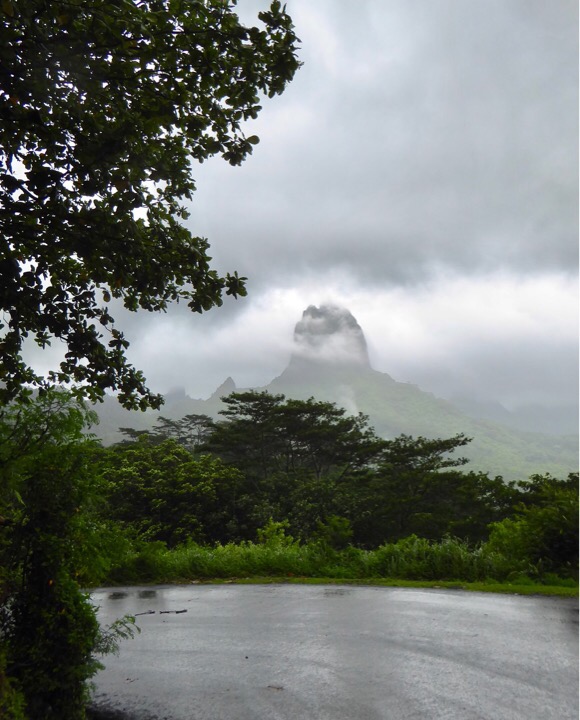 Woke up to pouring rain with no end in sight. Lots of conversation on what to do with the day. Snorkeling wasn’t really an option, the bays brown with silt from the run off. It would be hard to see your own foot, let alone any fish. After a light lunch, John called the front desk and rented a car, so we could explore the island. We all piled in to our little Renault Clio and off we went. Our mission was to scout out all the good snorkeling beaches that we’d researched and to find the large Super Market to pick up water, juice, treats and wine. It’s about 65 Kilometers (about 40 miles around the island), the car’s wipers don’t have a high setting, so John was driving slowly trying to see through the water sluicing off the windshield.

The car runs with a key card, similar to what you would use for a hotel room. The card also opens and locks doors.  Here we are parked at the supermarket.

Since we had a car and since we all had cabin fever, we decided to treat ourselves to dinner at Le Mayflower restaurant in the village just down the road. Pete had tried walking there, but with tiny road shoulders and cars slaloming around corners, he turned back before he got run over. It’s been raining so much that we have noticed a lot of the local men are just wearing their board shorts when they have to be outside. 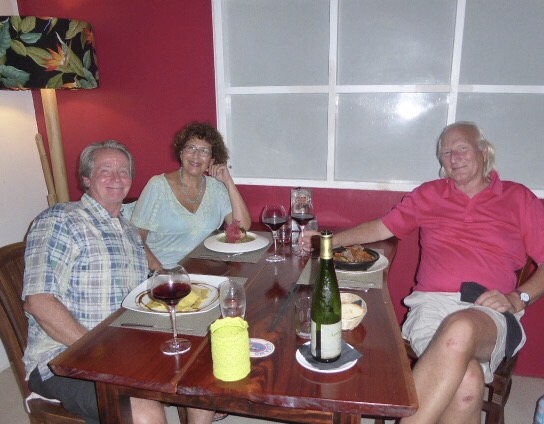 We arrived for dinner at 7 pm and finished up about 8:30 pm. We were the only customers they had that evening. Dinner was delicious, I had a deep water Moon fish.

Huge storm moved in during the night with 34 mile/hour winds and more torrential rain. Had a good night tucked up in our cozy little bungalow. The breakfast/lunch cafe and bar is about 50′ from our deck, we finally took the plunge and ran over for a continental breakfast and coffee. This is the part of the trip where I’m afraid we are all going to put on pounds, no exercise and lots of food, there’s not much else to do with the storms rolling in one after the other.

Once the wind died down some, we piled back in the car to head up Mt. Tohivea. We stopped at an archeological site, but hurried back to the car after making the aquaintance of the local mosquitos. We were on the the thicker red map road up to the Belvedere look out.

Here is a photo of the two bays, the left hand bay is Oponohu (near our hotel) and the right hand is Cook’s Bay. Though it wasn’t a particularly nice day the views were spectacular, dramatic and moody. See featured photo….

Next on the agenda was the island rum factory. See, we will suffer anything to entertain ourselves! The rum factory makes rum of course, but also Pineapple wine, Creme Coco, Creme Vanilla, rum and fruit punches. We had little samples of all and then hit the shelves. I have no idea where we are going to put all this liquor, as our suitcases are already budging.  I will definitely try to get the Pineapple wine home, it was unexpectly wonderful. 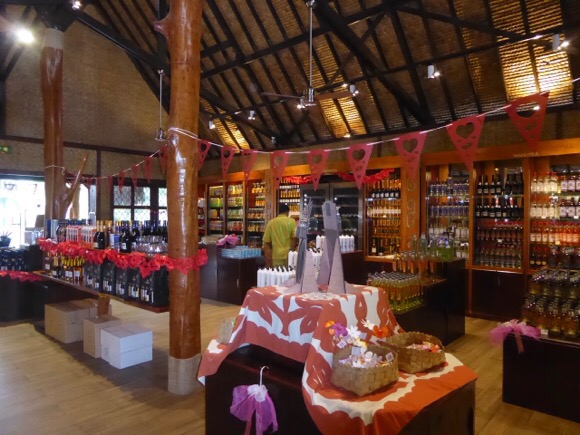 The factory itself was fairly large, busy and covered in solar panels. 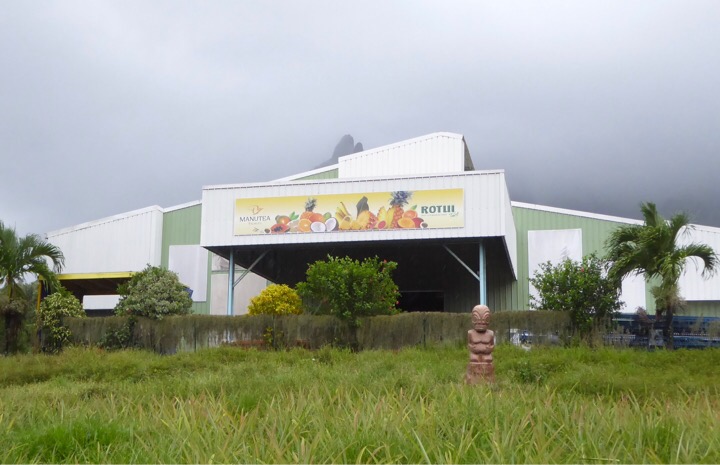 Back to our bungalows with enough excitement for one day. The weather is suppose to improve tomorrow and we are really hoping for a snorkeling adventure.