Our last full day of the trip and Paris. Of course because we didn’t need to drag everything from city to village to town, we did a little shopping in the morning. I had been urging Suzanne to buy some clothes, because most of them looked like they would fit her. Today was the day!

After our little spree, we walked up to the Musee Orsay. We were caught in a Paris deluge and fled to a deep doorway. After it cleared up we continued passing art supply stores, antique stores, and galleries. I had to take a picture of this amazing chest covered in amber. Don’t even want to know what they were asking for it and the other larger piece covered in turquoise. 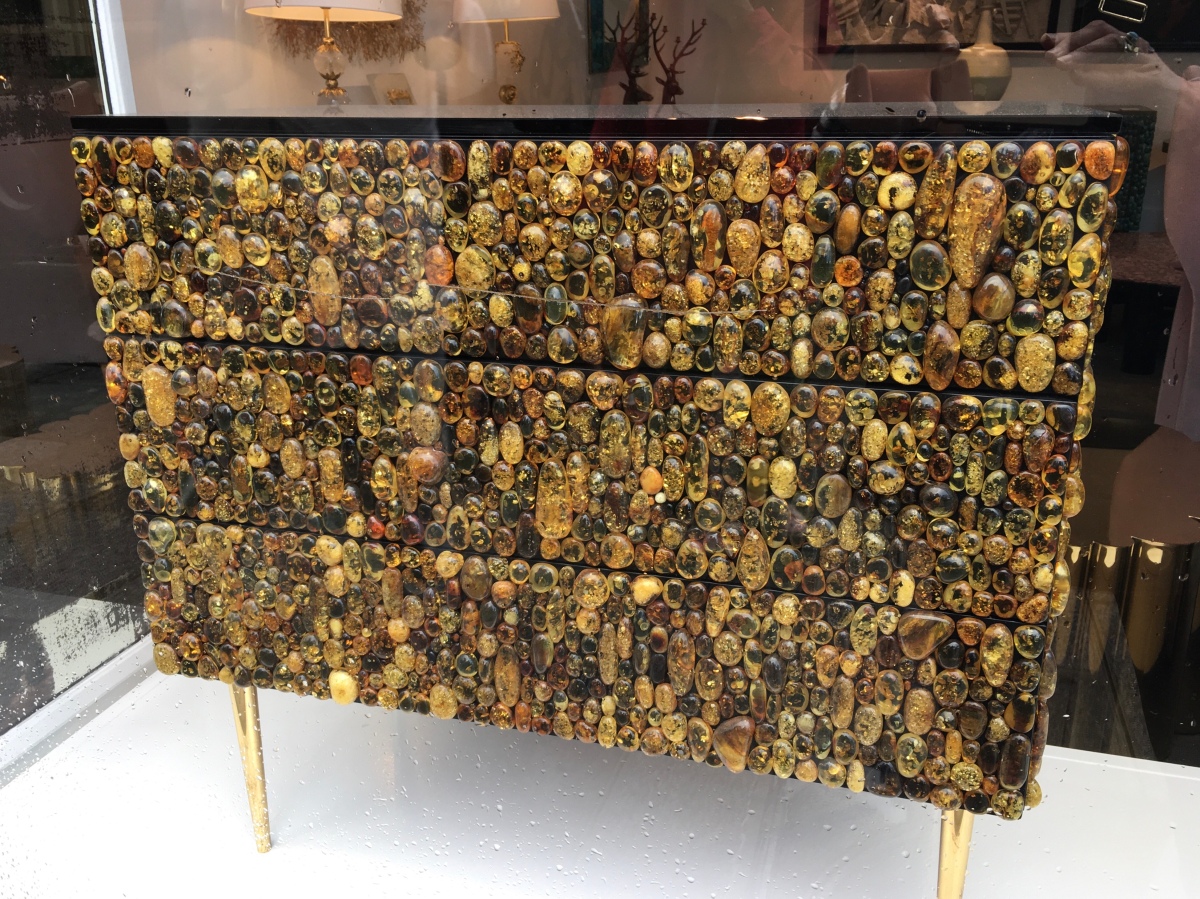 Once we got to the museum we parted ways. Suzanne headed back to the hotel and a certain bookshop, and I headed into the museum.

I wandered into a special exhibit called Black models: from Gericault to Matisse. I though I’d spend a little time, but ended up spending almost 2 hours.

The intention was not to create an exhibition on the representations of black people as a social group but more to raise the question of “model”, which can be understood as both, the model represented by the artist and as the bearer of values.

In the 19th century artists were caught up in the era’s contradictions towards slavery. They were witnesses to a very long and tumultuous processs leading to abolition that passed by a first decree granting emancipated slaves from the French colonies, full French citizenship without distinction on the grounds of colour . 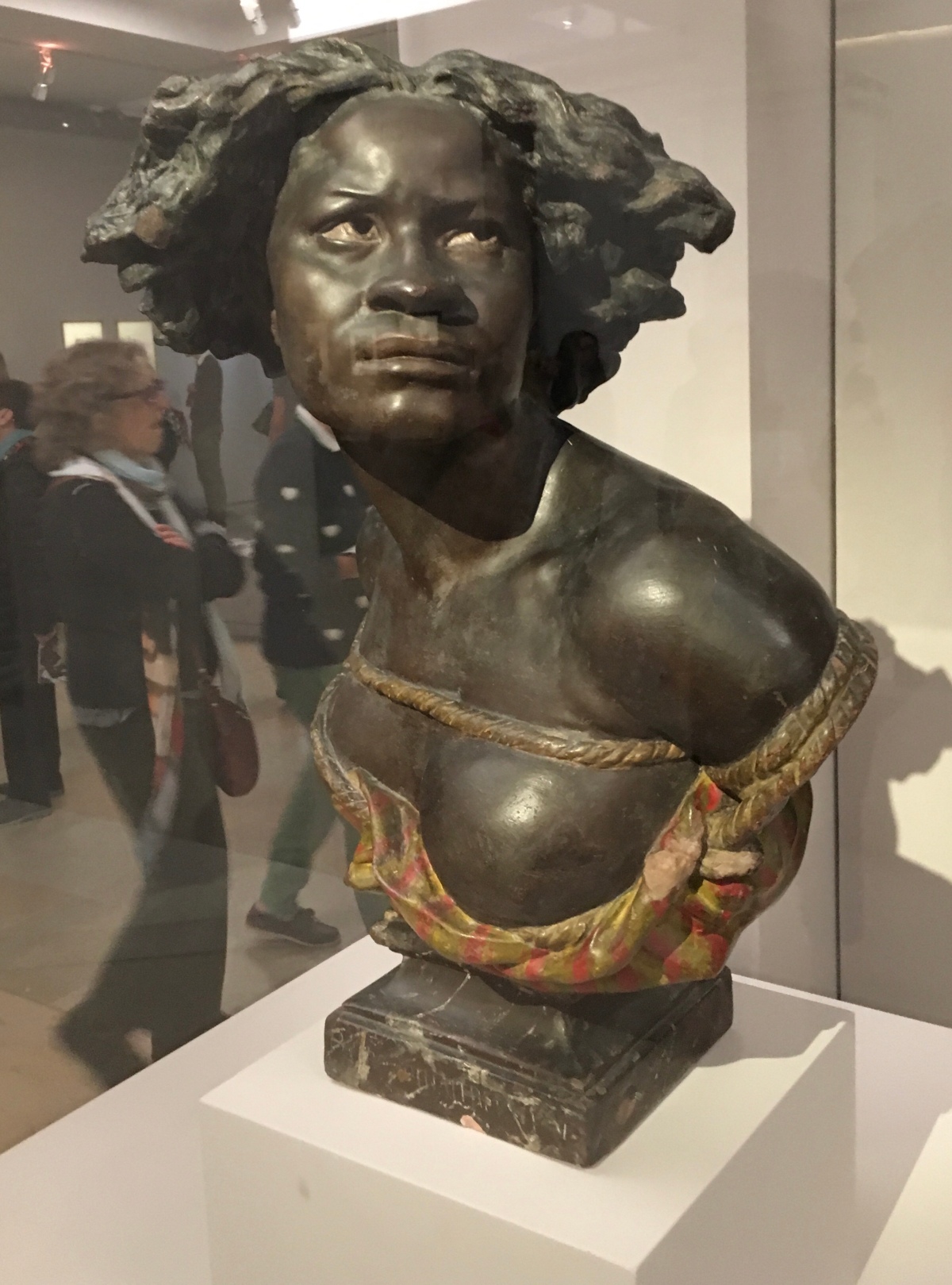 One of the ambitions of the exhibit was to find the identities of the models that have remained anonymous for so long. The above sculpture was created by Jean-Baptist’s Carpeaux in 1869, representing slavery of the Negresse. 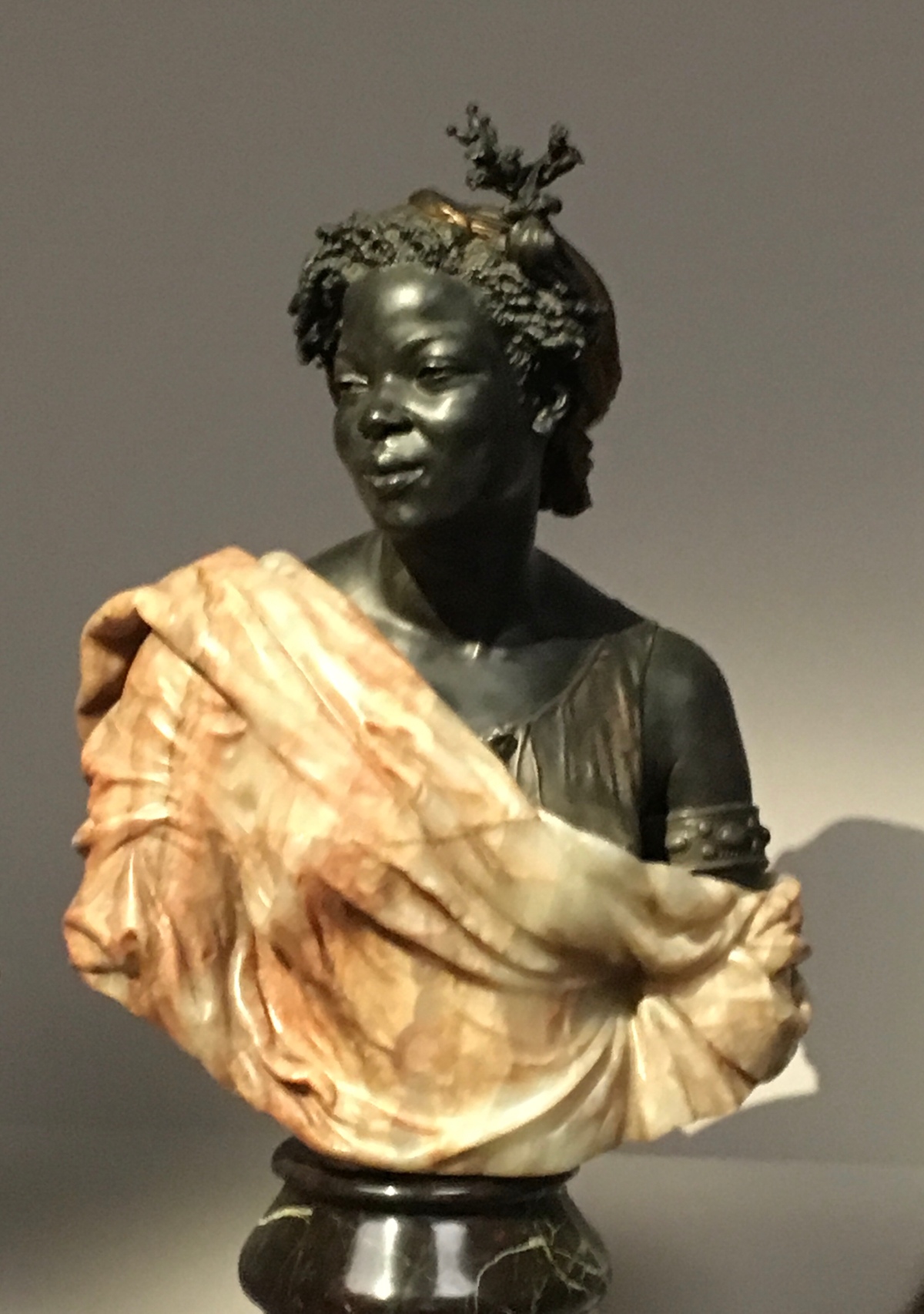 This incredible bust was executed by Charles Cordier in 1867. It was part of a series of sculptures he produced for the L’Exposition Universelle de Paris in 1867.

One of the most well known professional models of the 19th century was Joseph, below. He was originally from Santo Domingo and was part of an acrobat troupe. He was spotted by the artist Gericault who used him as a studio model. Thereafter he was a well-appreciated figure in artistic circles. His case of being so well known in the era was the exception.

This painting above is by Francois-Auguste Biard. It is called Proclamation of the Abolition of Slavery in the French Colonies.

Ira Aldridge the model in the photo above, had moved from New York to London in order to become a successful Shakespearean actor, in 1833 he became the first black actor to perform the role of Othello. He was a free-born black American very vocal about slavery and was used in this painting by John Simpson to portray the dignity and hope of the enslaved.

Elvire Van Hyfte was born in the Belgian Congo, studied Philosophy at the University of Louvain before marrying a Belgian lawyer and businessman. She settled in Nice in the 1940’s. She became acquainted with a good friend of Matisse, as well as Louis Aragon and Elsa Triolet. She was a regular visitor to Matisse’s home and posed for several drawings and paintings. When the Congo achieved independence in 1962, Elvire Van de Hytle returned to Katanga, attended university and married a French diplomat. 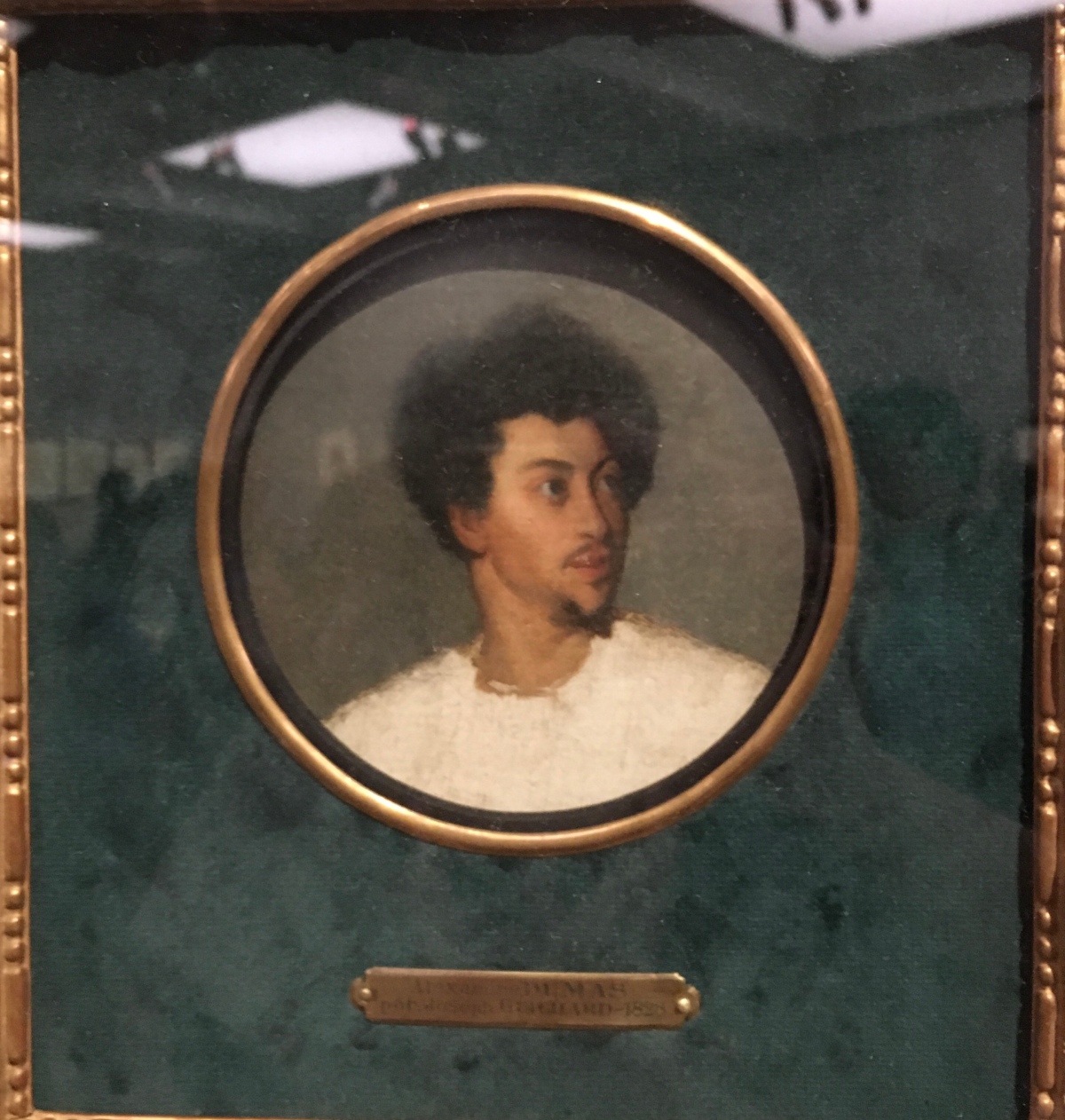 Alexander Dumas, author of the Three Musketeers was at first ridiculed in caricature by some in France until he became an international success. Once he had received acclaim his portraits showed him as a light skinned man, the symbol of respectability. 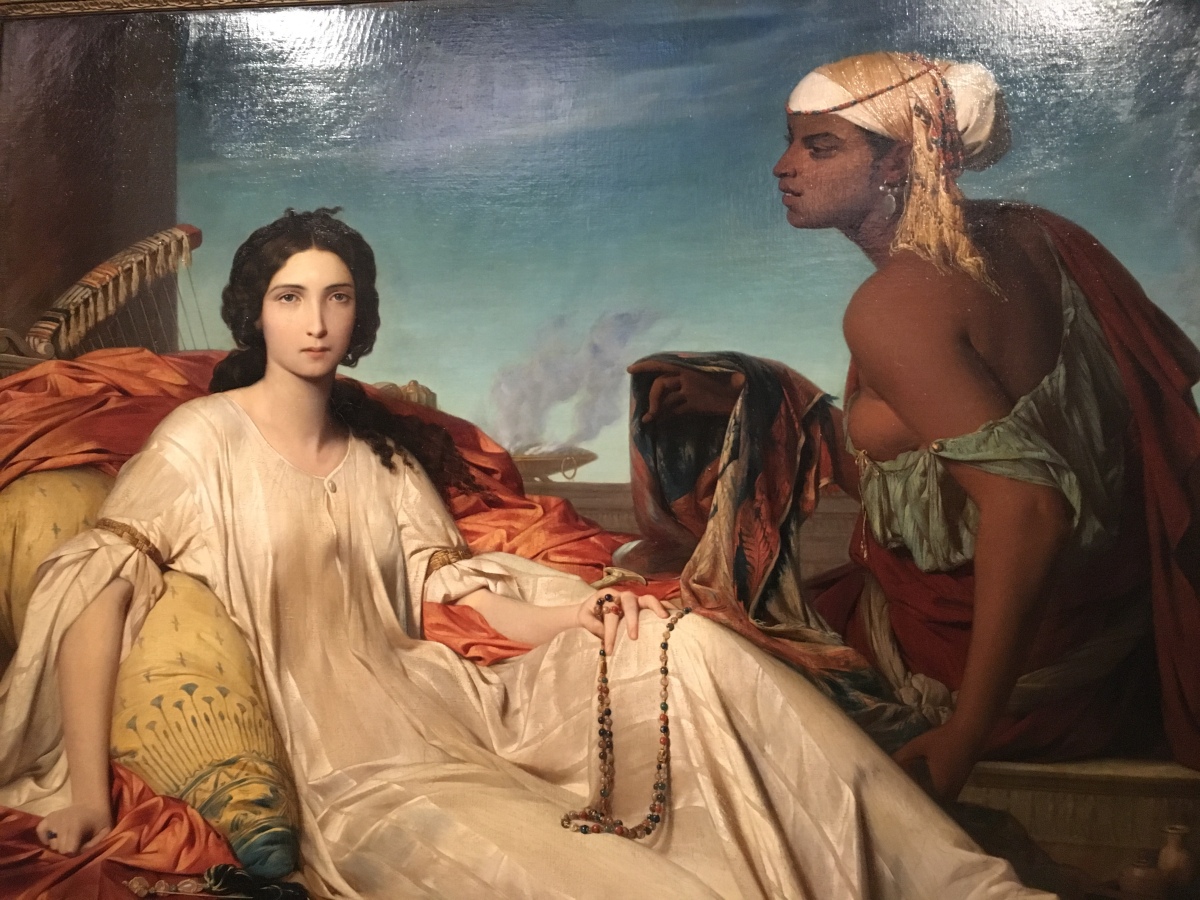 A section of the exhibit dealt with Black models of the 19th century that were usually depicted as servants or slaves.

‘Olympia’ one of Manet’s most famous and infamous paintings created a furor when first exhibited in Paris. Viewers were so shocked that they had to be restrained from destroying the painting. The subject matter of Olympia, most probably a courtesan and her maid proffering flower’s sent by an unknown admirer. The maid shows a certain independence with a dignified bearing and questioning glance. Olympia is boldly nude, looking the artist in the eye, not the idealized or mythical woman usually depicted at that time.

This painting was so admired by other artists, that many created their own versions of the same subject matter. 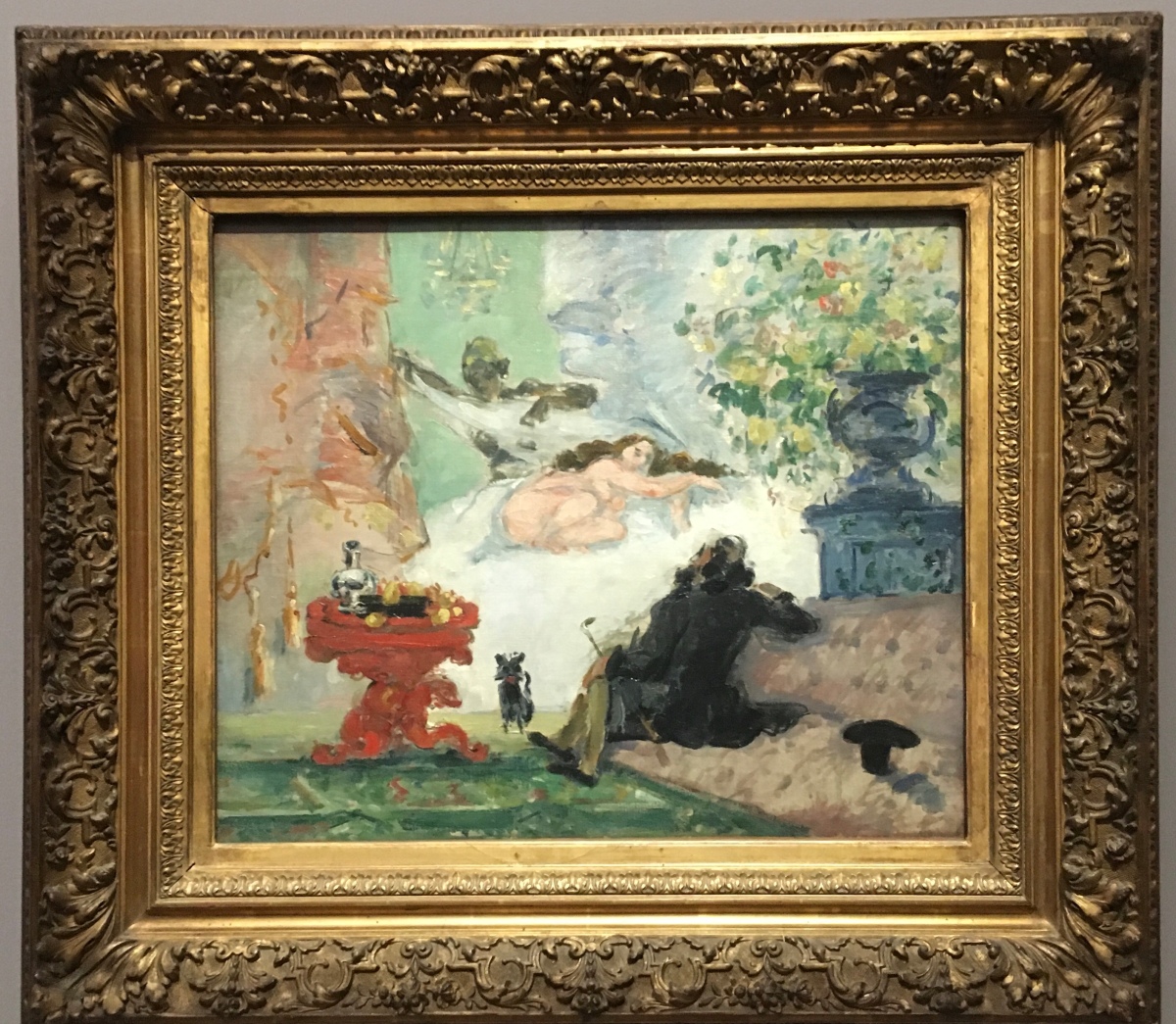 This sculpture called, ‘I Like Olympia in Black’ is by Larry Riviera. The painting above the sculpture is by Cezanne and is called, ‘A Modern Olympia”.

This painting is Bazille’s, ‘Young Woman with Peonies’ 1870. The flower-seller is a black Parisian, who’s neither a slave or in servitude.

The exhibit covered the art and posters from the jazz scene and Black entertainers from the early 19th century. 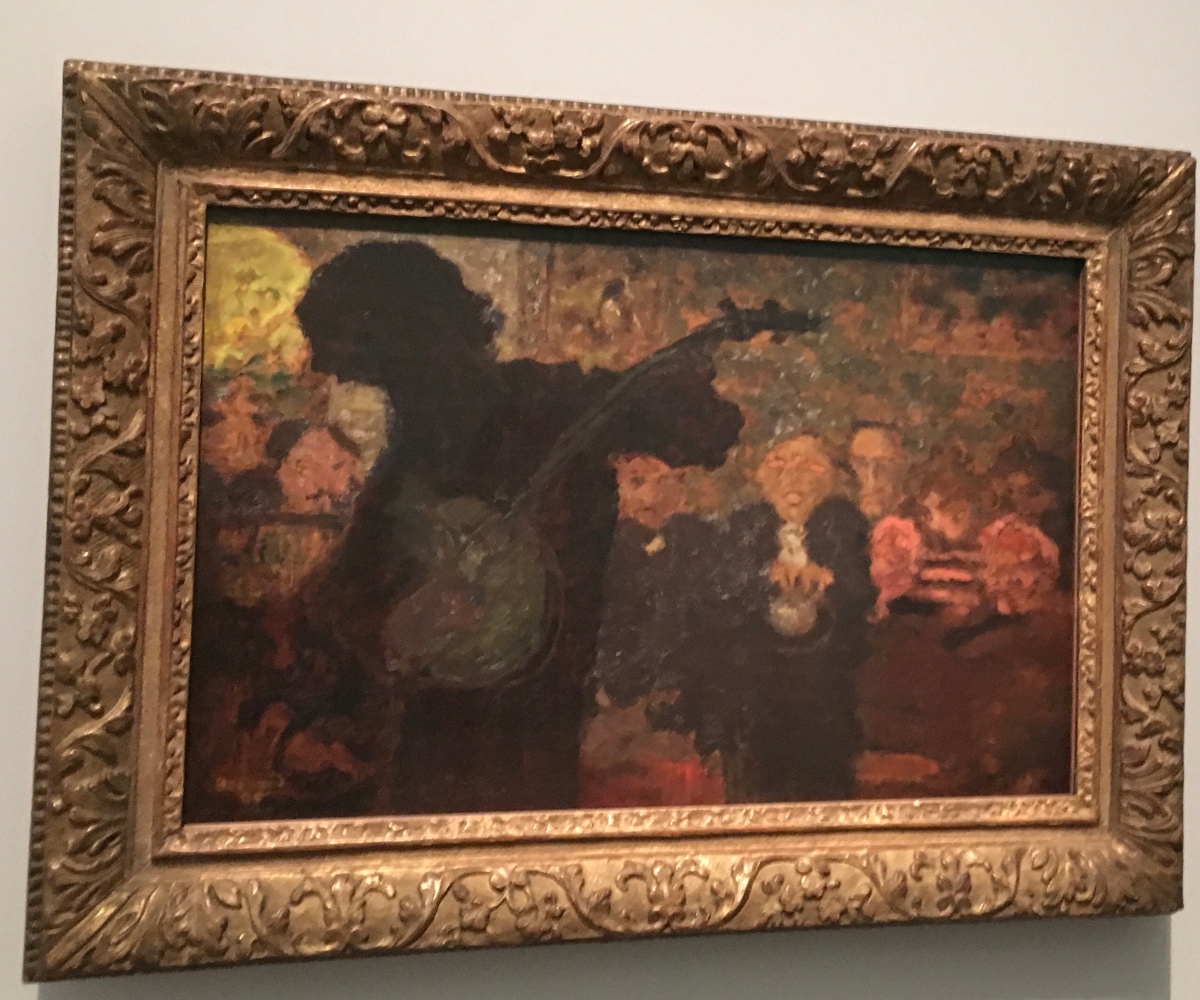 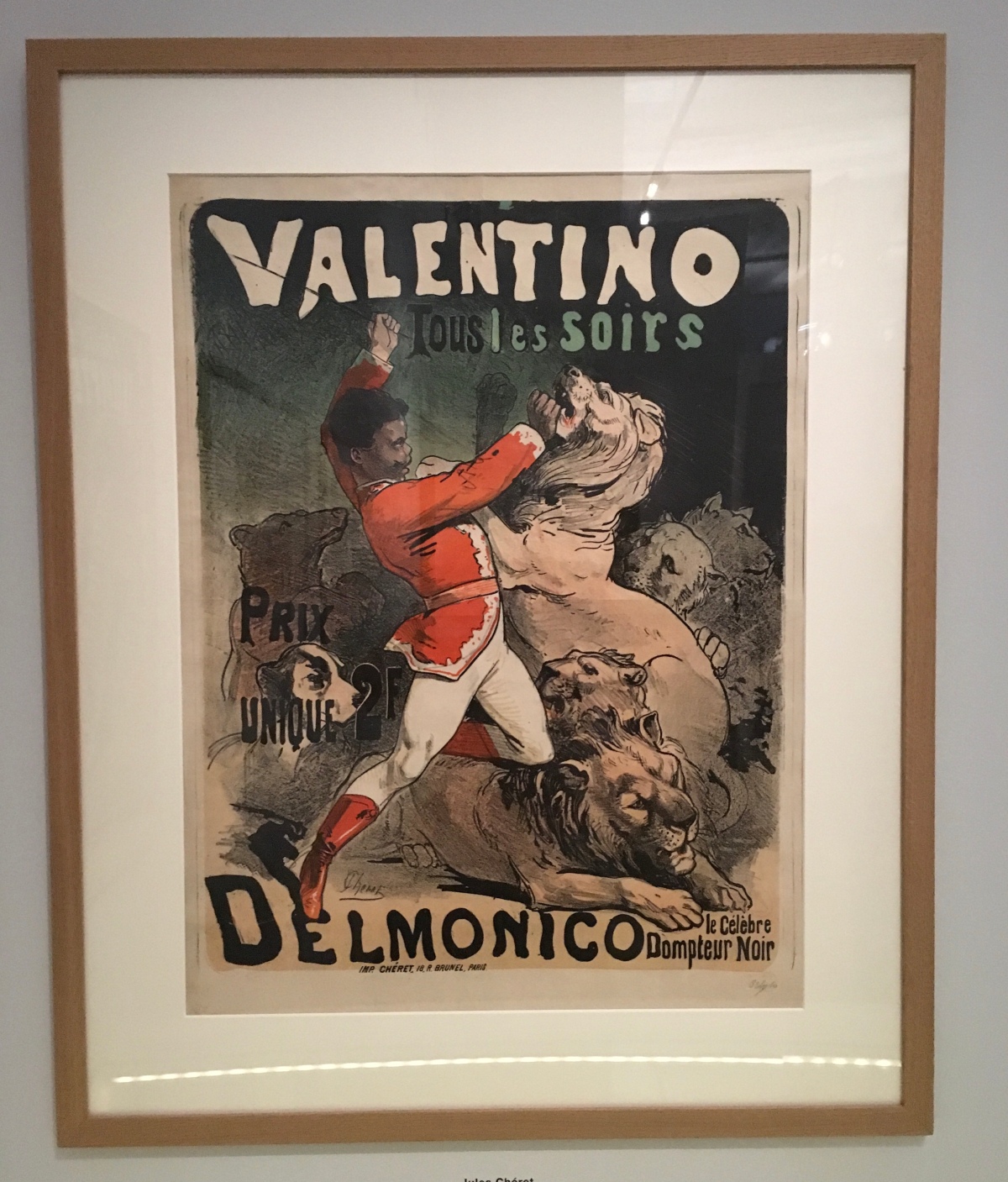 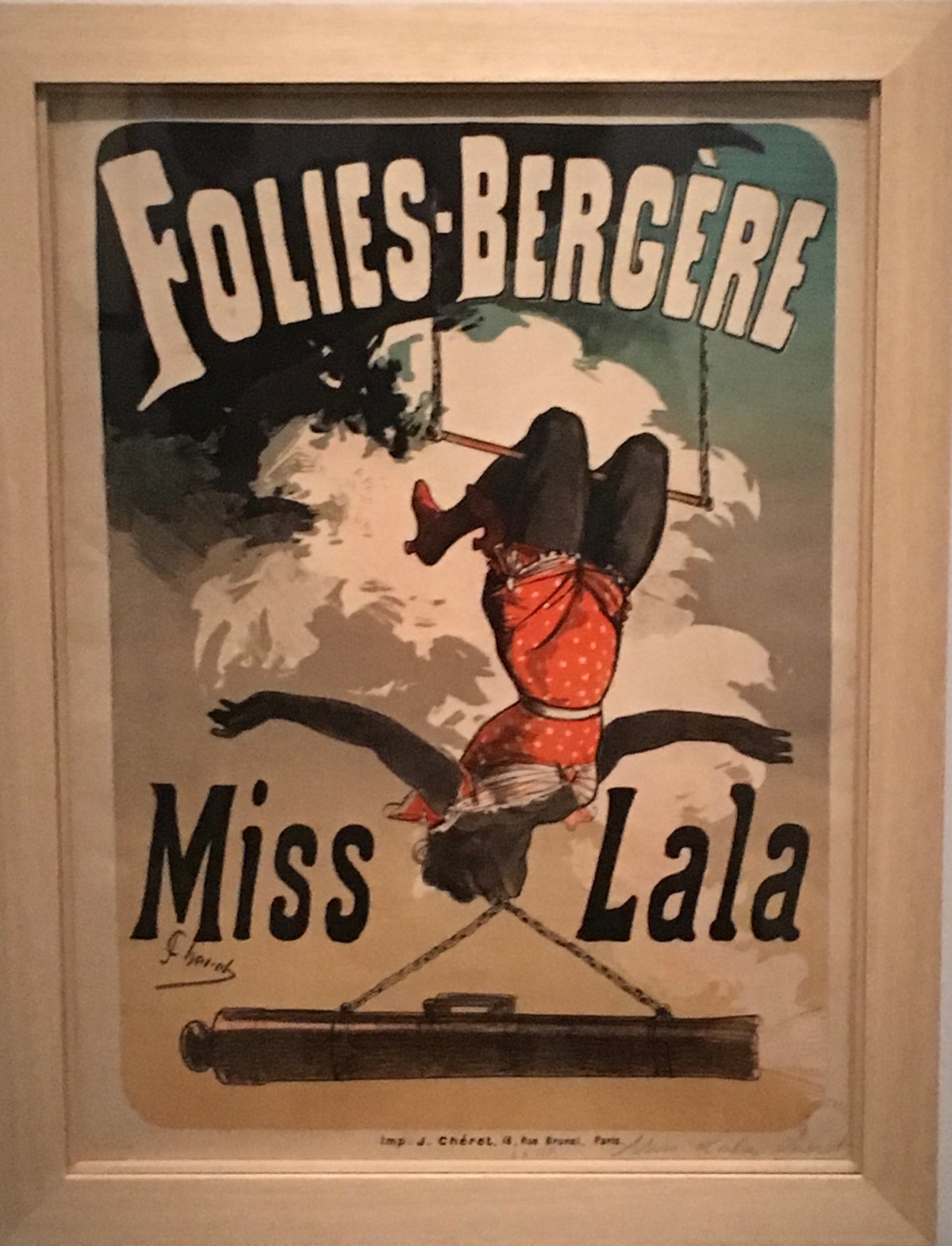 This is the Josephine Baker that worked with the French resistance during WWII and was one of the few women given a medal for her wartime work by Charles DeGaulle.

After finishing up in this special exhibit, I took a quick swing through the permanent collection on the main floor, then dashed up to the Impressionists.

Had to take a photo of this white French cow. Suzanne and I saw them all over the country and took quite a liking to them.

I was more interested in this photo of a rather grim Napoleon after reading of his decision to reinstitute slavery in French colonies to increase profits. 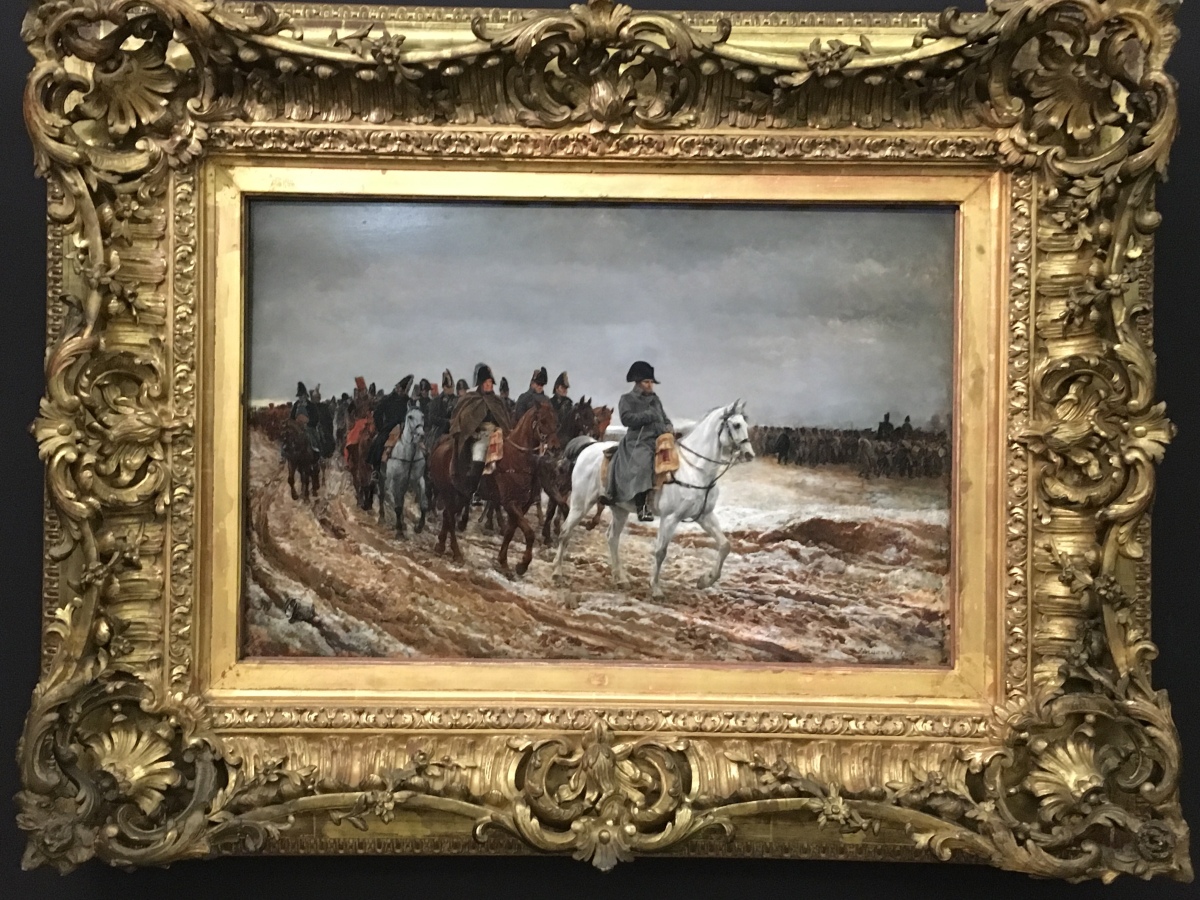 This huge sculpture, ‘La Danse’ was originally created for the facade of l’Opera in 1869, by Jean-Baptist Carpeaux. It was widely criticized as obscene. 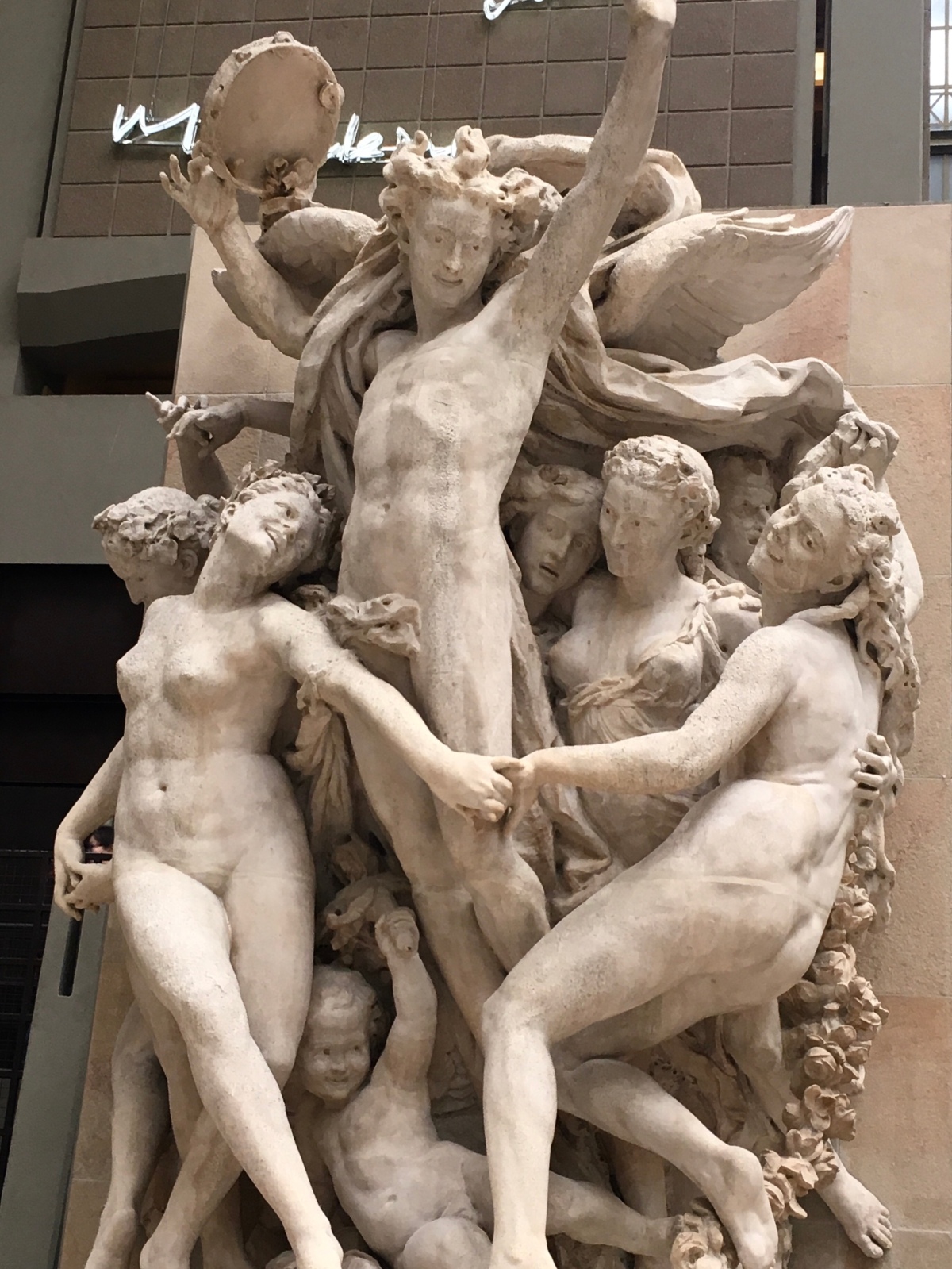 As you can see from the featured photo and this one, the Orsay clock gives a unique view of Paris, with the Louvre prominent. 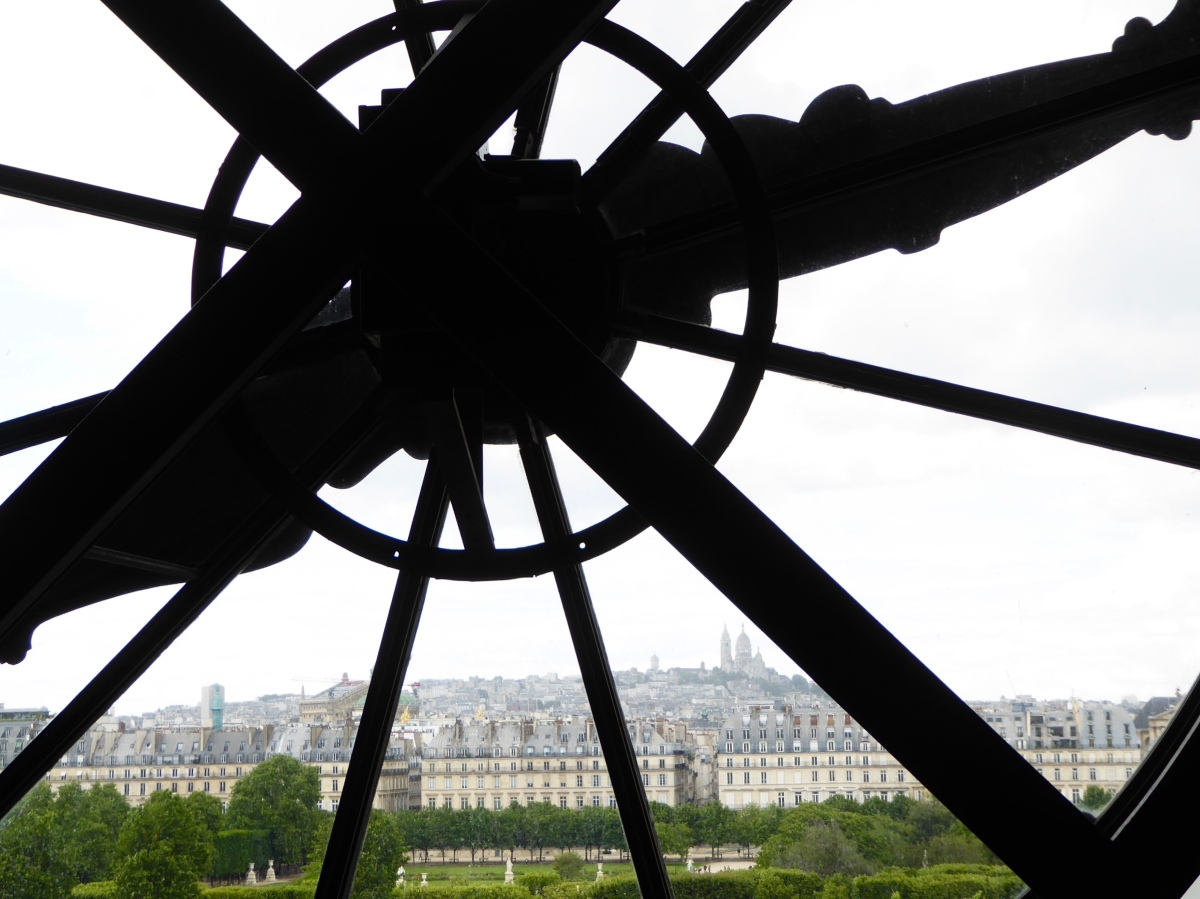 Pushing onward it was getting later in the day, so I did a whirlwind tour of the Impressionists. 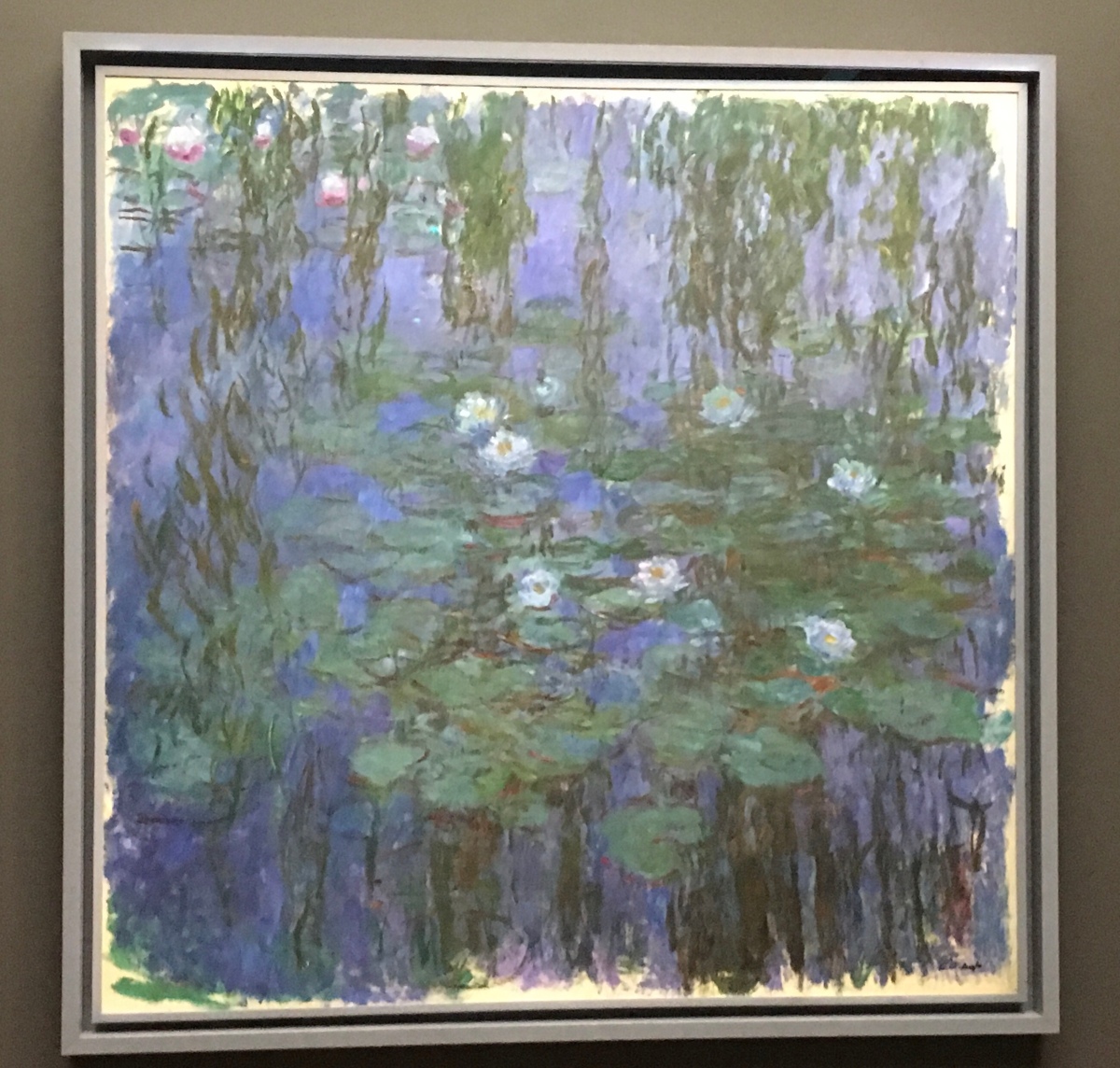 Degas’s ‘Little Dancer’ was criticized as too realistic by the Impressionists. There is actually a book about the little dancer, age 14 that reveals much about Parisian life in the 19th century. Most of the dancers were from the poorest families, where there were very few respectable career options open to girls. 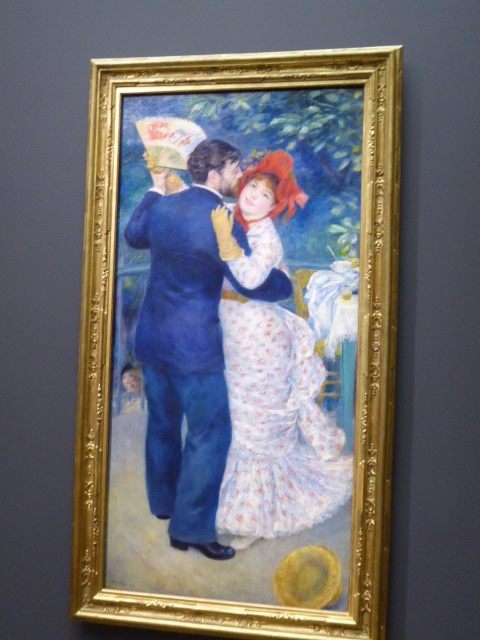 It was a zoo in the Impressionists, so I left at about 4:40 to walk back to meet Suzanne. Unfortunately I only made it a block, the next 3 blocks (very large blocks) were closed with yellow tape by a fairly significant police presence. There was a bridge, so I crossed over the Seine to the Louvre to follow the river until I could cross back over to the other side where our hotel was located. Definitely a longer walk than I was looking for. We went out for a quick last dinner in Paris, as our packing had to be done and we had an early morning to catch our flight home. I added it up and we have walked about 128 miles on this trip according to my Fitbit. I think we are going to have to rest up when we get home.

It’s been a great trip, so until the next one….