Everything got off to a good start this morning, we were on the road by 9:30 am. Our train didn’t leave Dijon until 12:01 pm, so we had plenty of time to fill the tank on the car, drop it off and make our train. 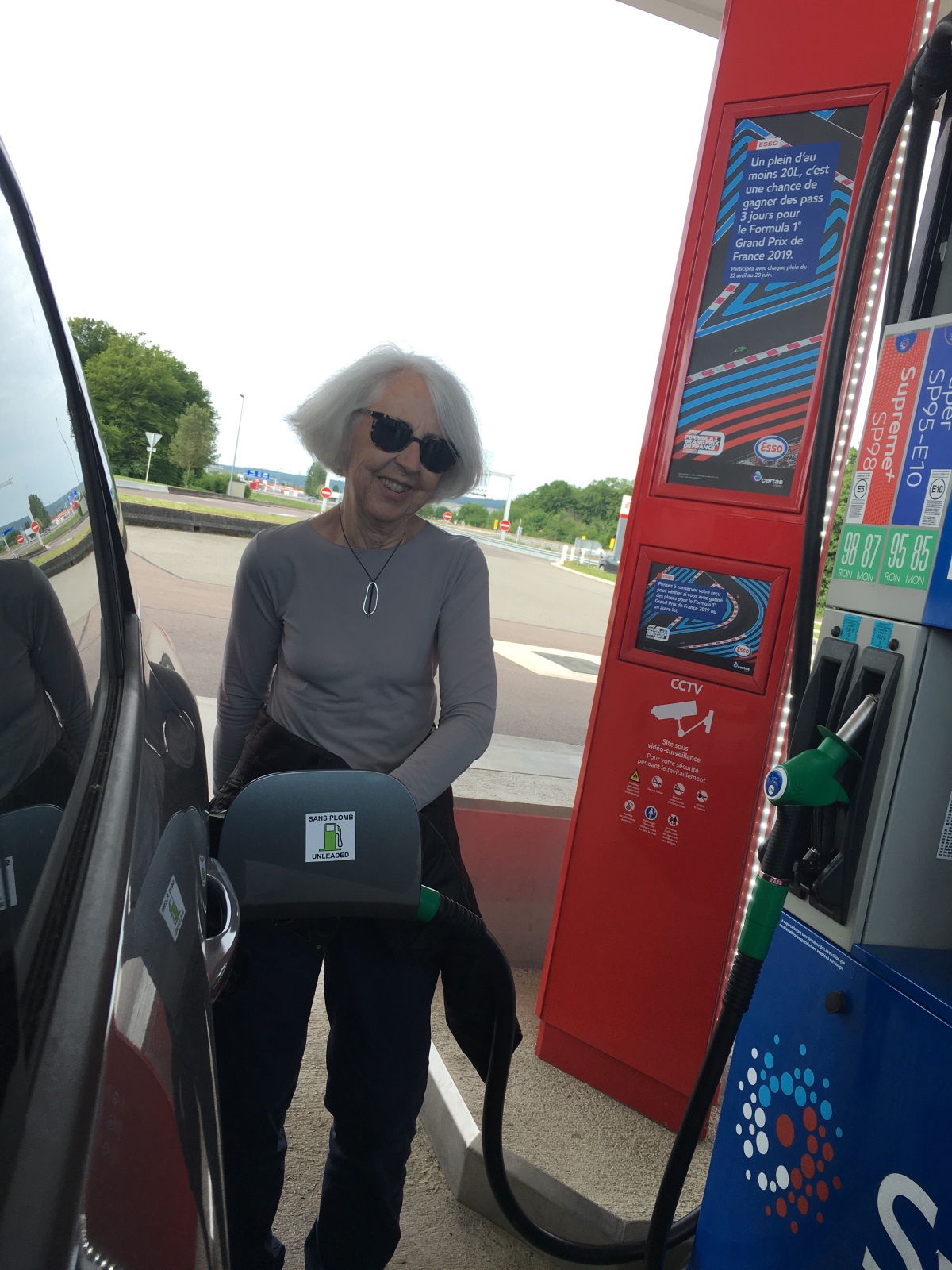 We had a journey through Dijon to the train station, Babette really got confused then we pulled off for gas and had us going in all directions, but the right one. We were over an hour early to the station, so had some cappuccinos and waited for our platform to be posted. Once we made it to the correct platform we were confronted with about 20 stairs up to the tracks; always fun with a backpack, purse and 35 lb. suitcase. Fortunately a young man came to our rescue after the first pathetic 6 or 7 steps. Suzanne reminded me that in A Streetcar Named Desire, Blanche Dubois said, “I have always depended on the kindness of strangers”, so true for us today. None of the cars were marked on the exterior, so it was a race to find carriage 12. By the time we got there most of the luggage space was taken. A nice man rearranged all the bags, so Suzanne could fit hers in. I found a vacant seat for mine. After all his help, we discovered he and his son were sitting in our seats. So we took the empty seats behind them and had just started to relax when we were informed that we had to move for the seats ticket holders. We rode to Paris on opposite ends of the carriage. I had a nice nap and watched the pastoral countryside roll by. 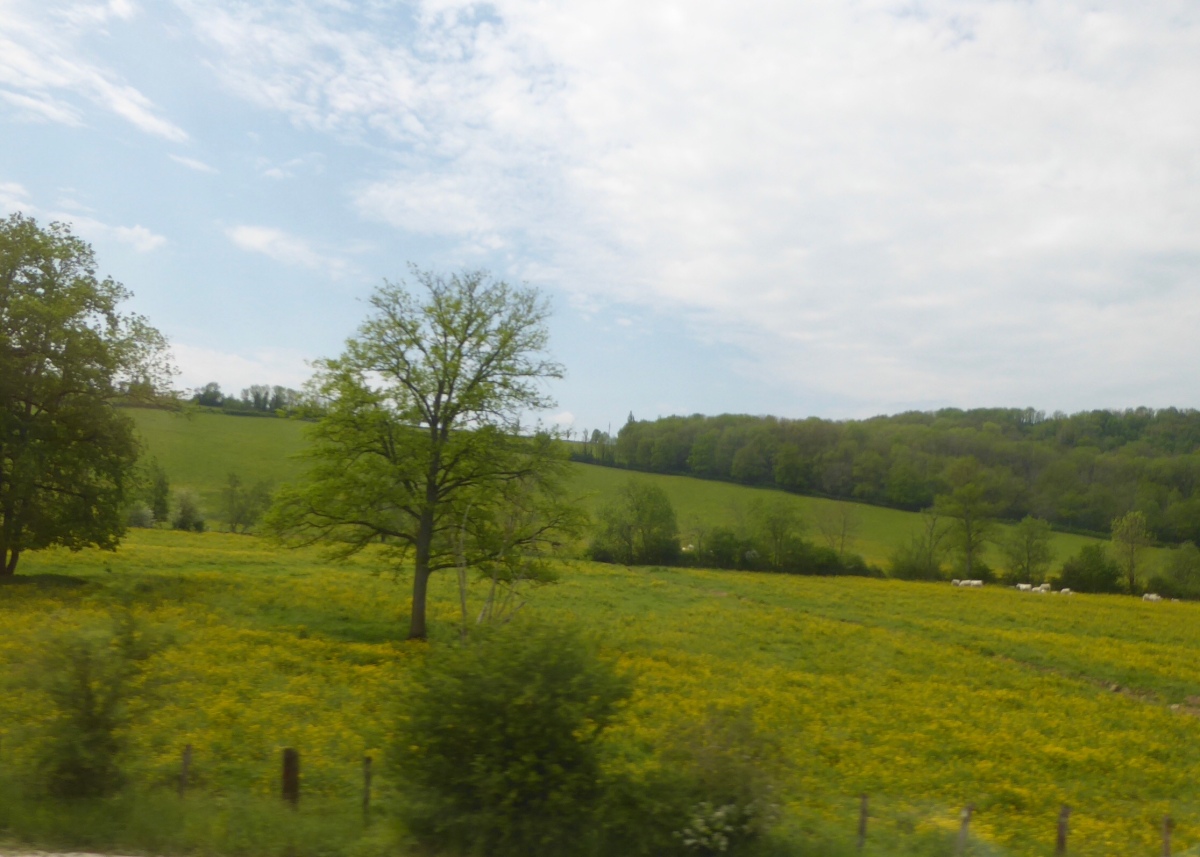 I think birds must have dropped mustard seed over most of France. Every field seems to have some, not sure if these cows actually eat it.

We arrived in Paris, we have been seeing military with their submachine guns at the ready. We caught a cab and shot to our hotel in a major downpour. The hotel is in a super location. It is tiny with halls just wide enough for a suitcase. Suzanne and I took turns taking the little elevator to our floor with our luggage. I think the hotel was decorated by someone on LSD. We have fake stone patterned carpet, cowhide patterned wallpaper, wood paneling, fake beams and an Art Deco wall above the bed, all in a 12′ x13′ room with 2 TV’s, a desk and twin beds. I’m thinking garret, so Parisian. It’s clean and the people have been really nice. This is so weird after having just come from a meticulously authentic country home with huge rooms. 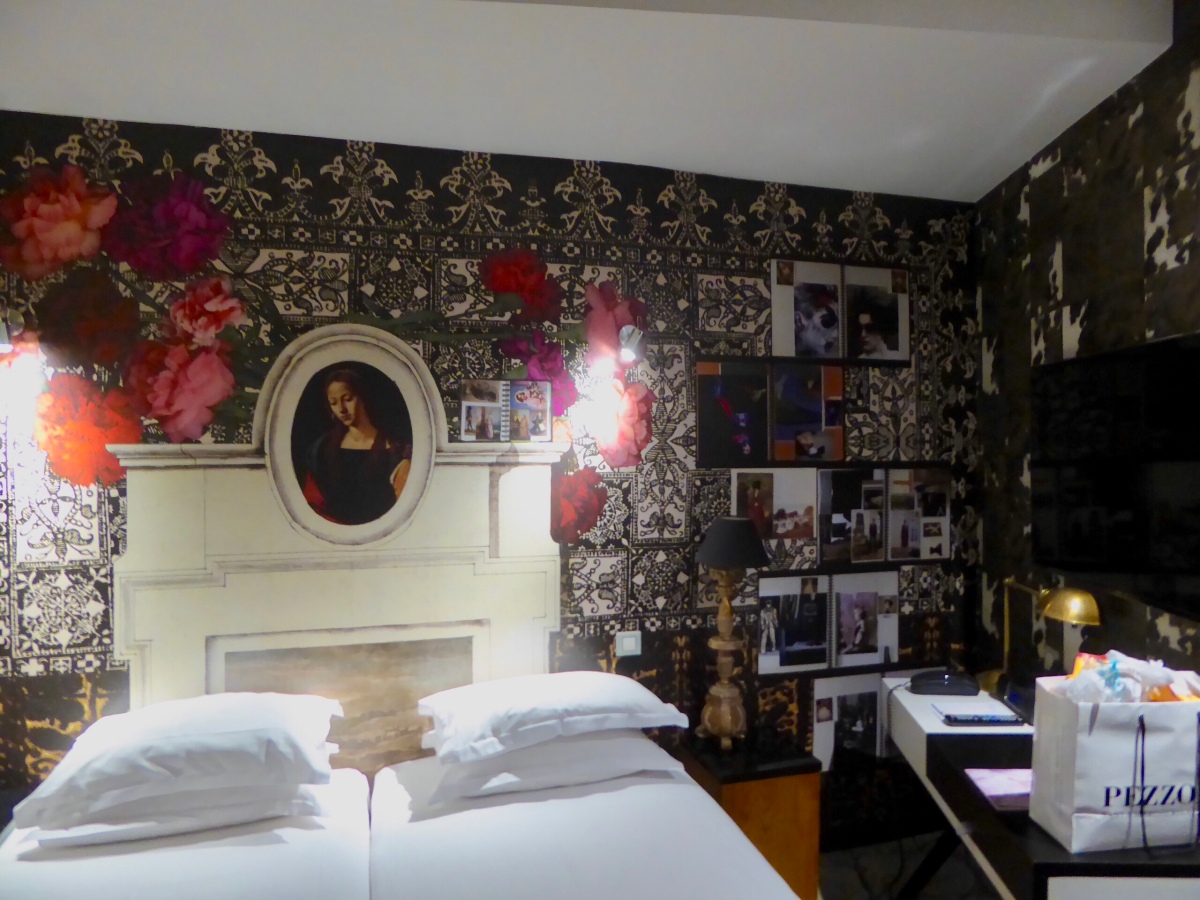 We were famished. It was about 2 pm by the time we dumped everything in our room. We are in tourist central and right across the river from Notre Dame Cathedral. There are restaurants everywhere. We picked one that played the same Michael Jackson song every 10 minutes, while some of the staff tried to sing along. We only hoped the the food was better than the singing, it was. Pizza and salad hit the spot.

We debated on what to do after lunch and decided to walk around Notre Dame Cathedral. The weather was vacillating between pouring rain with wind and sunshine. 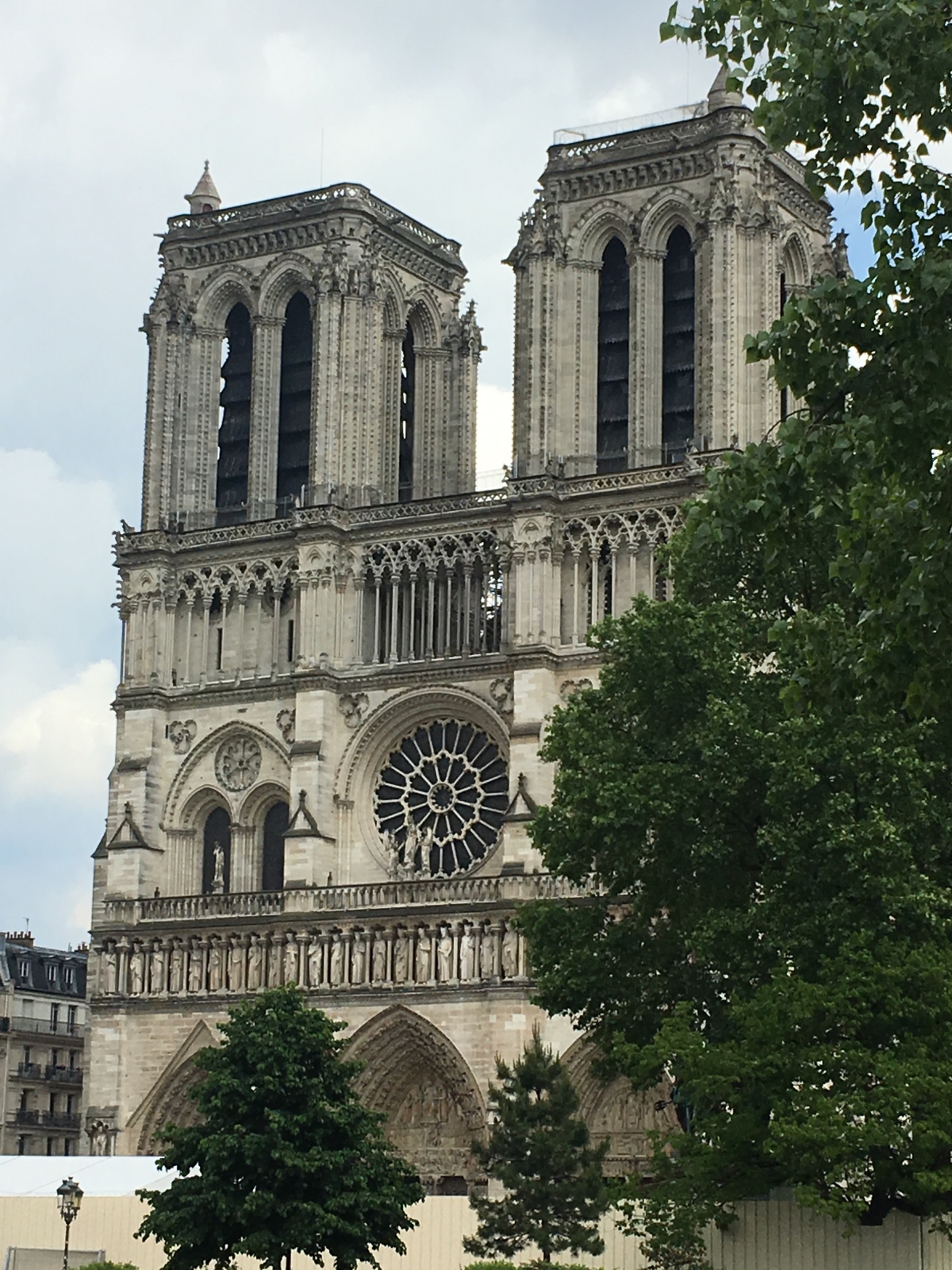 The 500 firemen fighting the April 15th fire were able to save the stain glass windows, facade, towers, walls, buttresses, and the great organ (8,000 pipes), which had some water damage. The cathedral is owned by the state and they self insure. However, if any of the contractor’s working on the renovation at the time of the fire are found to be responsible their insurance will have to pick up the cost. French President Macron vowed the cathedral would be rebuilt in 5 years. An international architectural competition was announced to redesign the spire and roof that were lost. A new law was immediately drawn up exempting the cathedral from existing heritage laws and procedures. They are looking at all possibilities even contemporary ones. Notre Dame may look very different when repairs are completed, much to the horror of heritage experts. 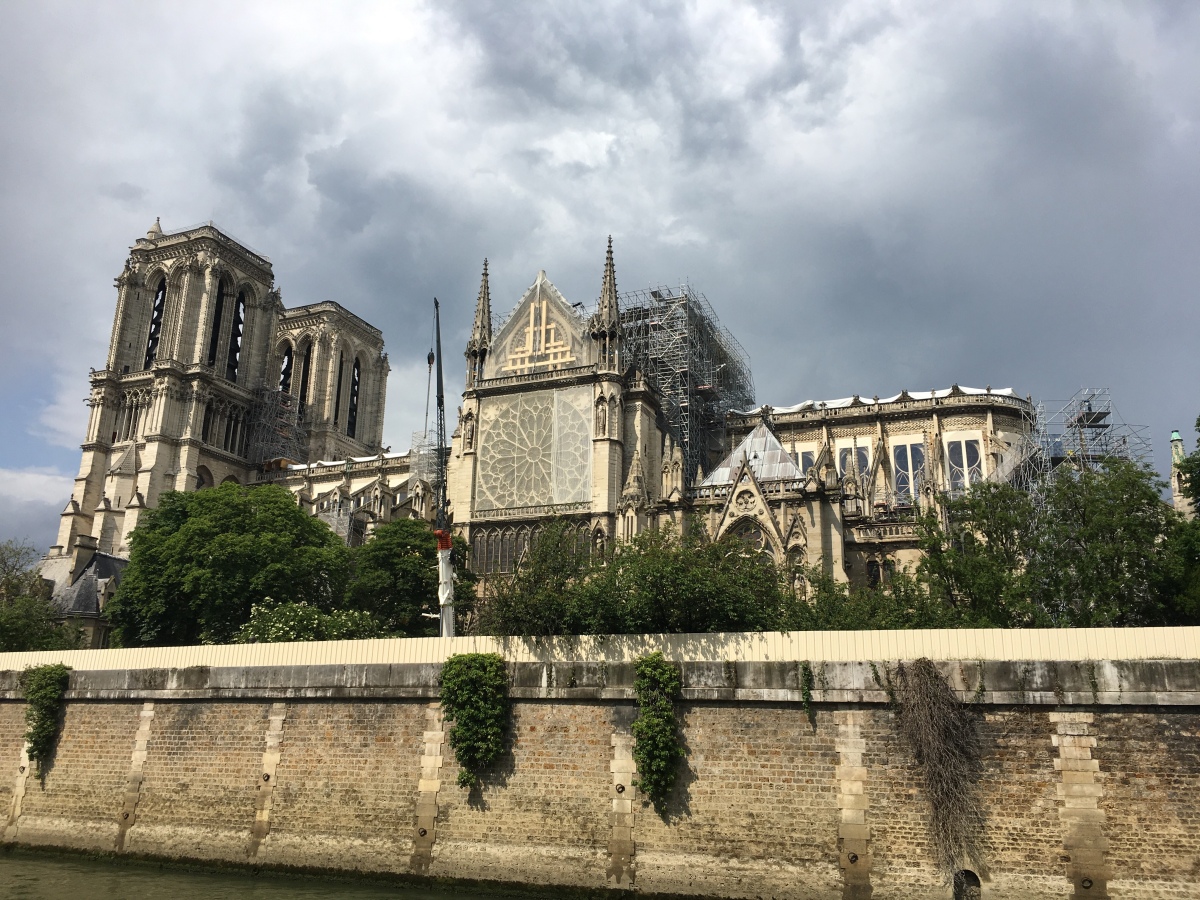 That’s all we had in us. It is a shock having come from Burgundy countryside to Paris with it’s hordes of tourists, traffic and density. We are adjusting.

One thought on “The City of Lights”