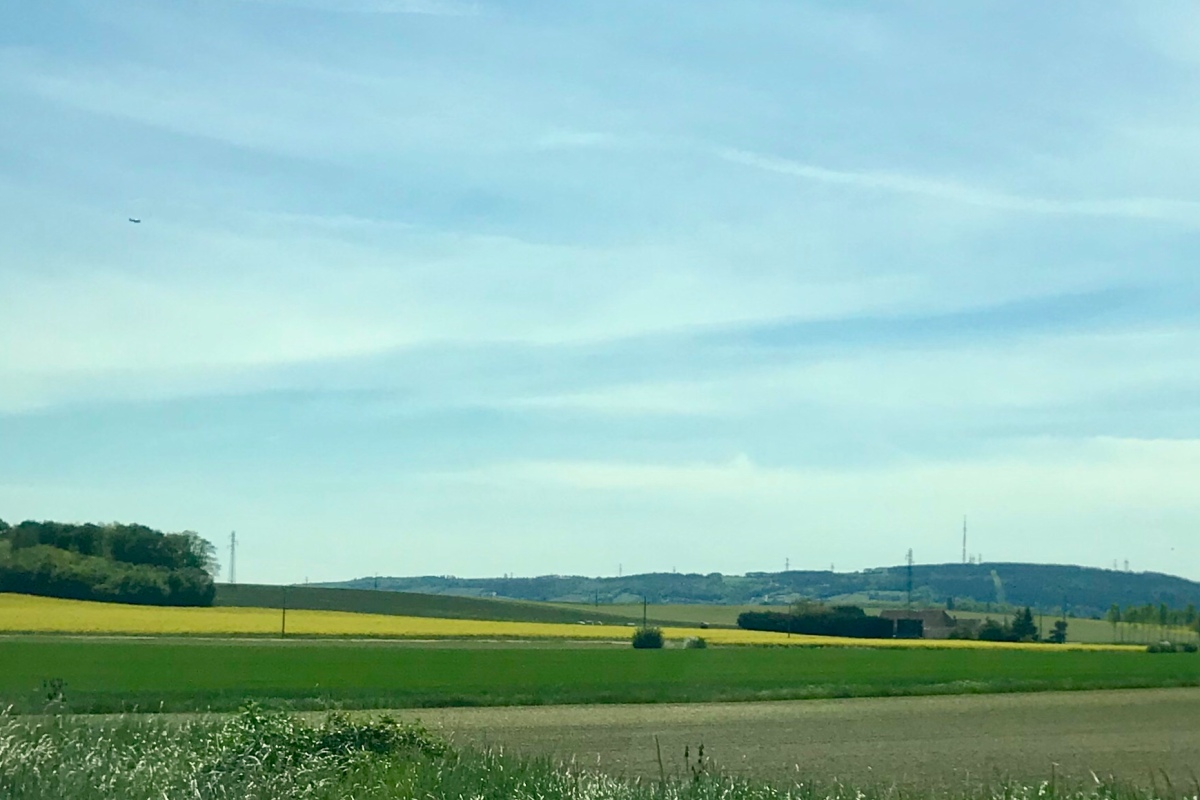 We’re a bit slow today, but we finally got on the road late morning. Driving through the Dijon area, we were amazed by the huge, rolling hills of mustard (featured photo). In our area of Meursault its endless fields of grape vines. Unfortunately, Babette had us on the Autoroute (freeway, autobahn, etc.) and we weren’t able to get many photos. Most of the Autoroutes are toll roads with the speed limit usually about 130 K/h or a little less than 81M/h. Here is the tree arbor we drive through almost everyday. It looks so much better in the sun. Suzanne took this great photo while I drove (see rule #2).

The vineyards workers were out in force today.

We were heading to the little village of Bèze, northeast of Dijon. On our way we passed through the village of Tanay and saw this grand chateau.

Besides being a lovely village, Bèze has an underground Grotto that was used in Medieval times as refuge during seven separate attacks by the Vikings, Visigoth, and other raiders. Since the Grotte de la Cretanne caverns are a continuous 12 degrees Centigrade (53.6 F), they were also used for perishable food storage. In the 1970’s the presence of another cavern was detected by airflow, it took 10 years to cut through to find the cavern and another river. This underground network of rivers wells up through 2 separate sumps creating the Bèze River which is 10 meters wide (33 feet) with an average annual flow of 4 cubic meters/second (140 cu ft/s)*. 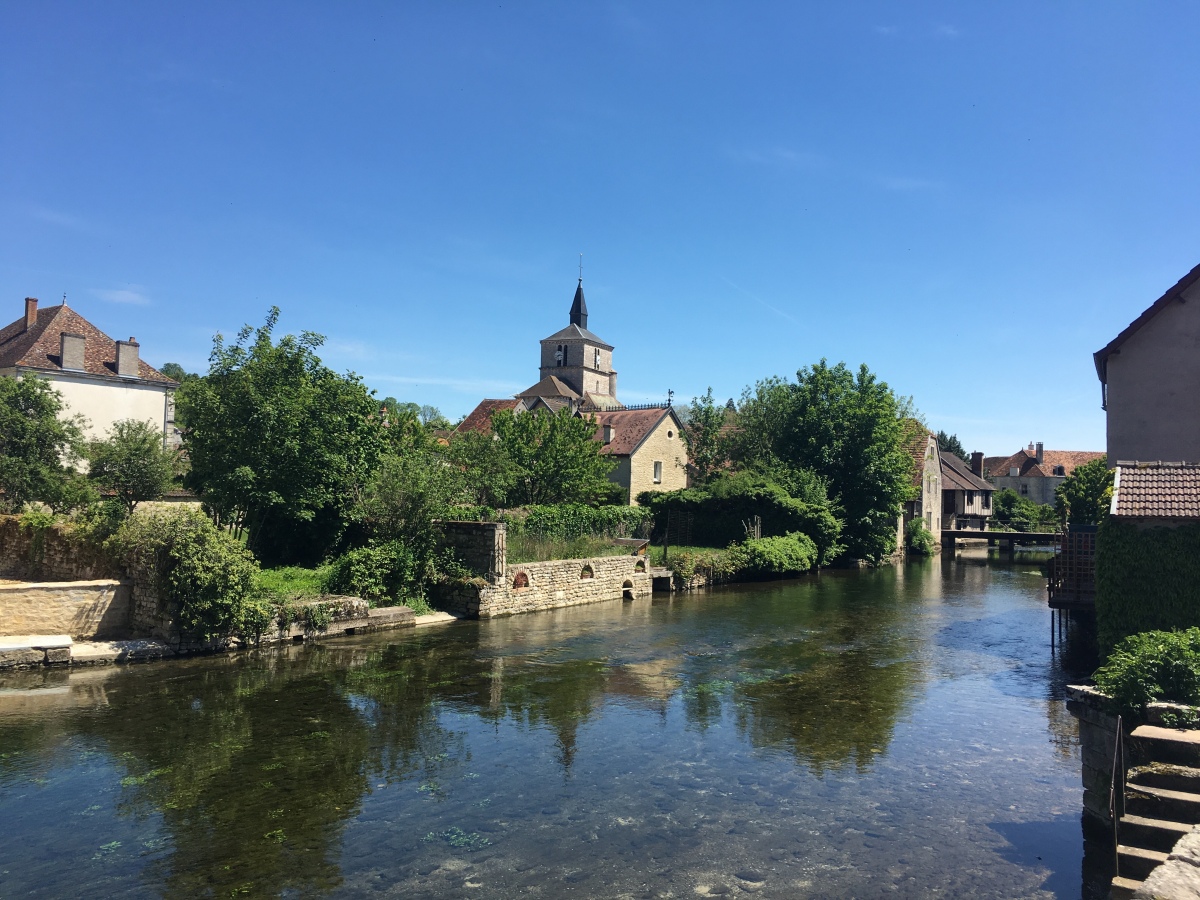 In the photo below is where the water surfaces to create the Bèze River. It’s called the Resurgence.

You can see the water welling up in the dark area below. 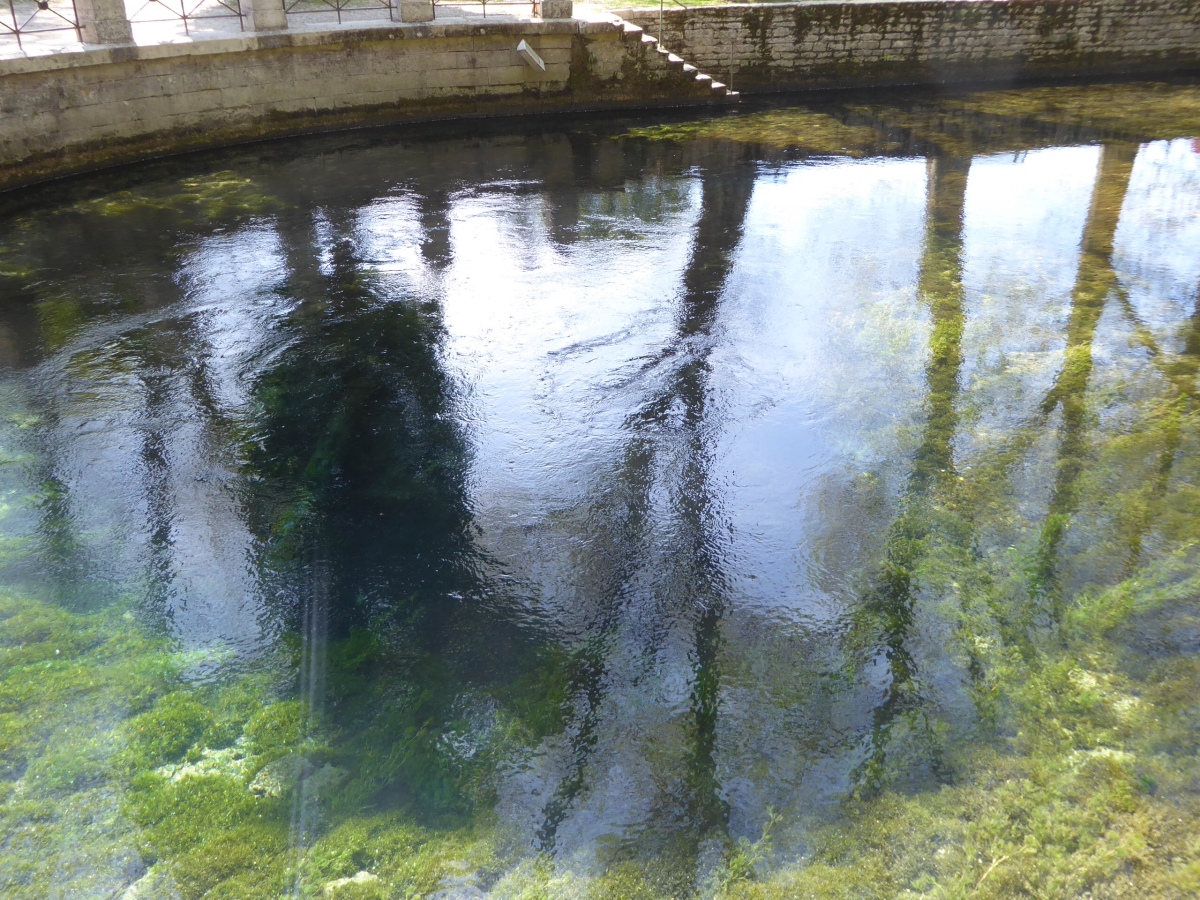 Suzanne and I signed up to take a walk and boat trip through the caverns at 2 pm. In the meantime we took a walk along the river, through the village and to a little cafe for lunch. 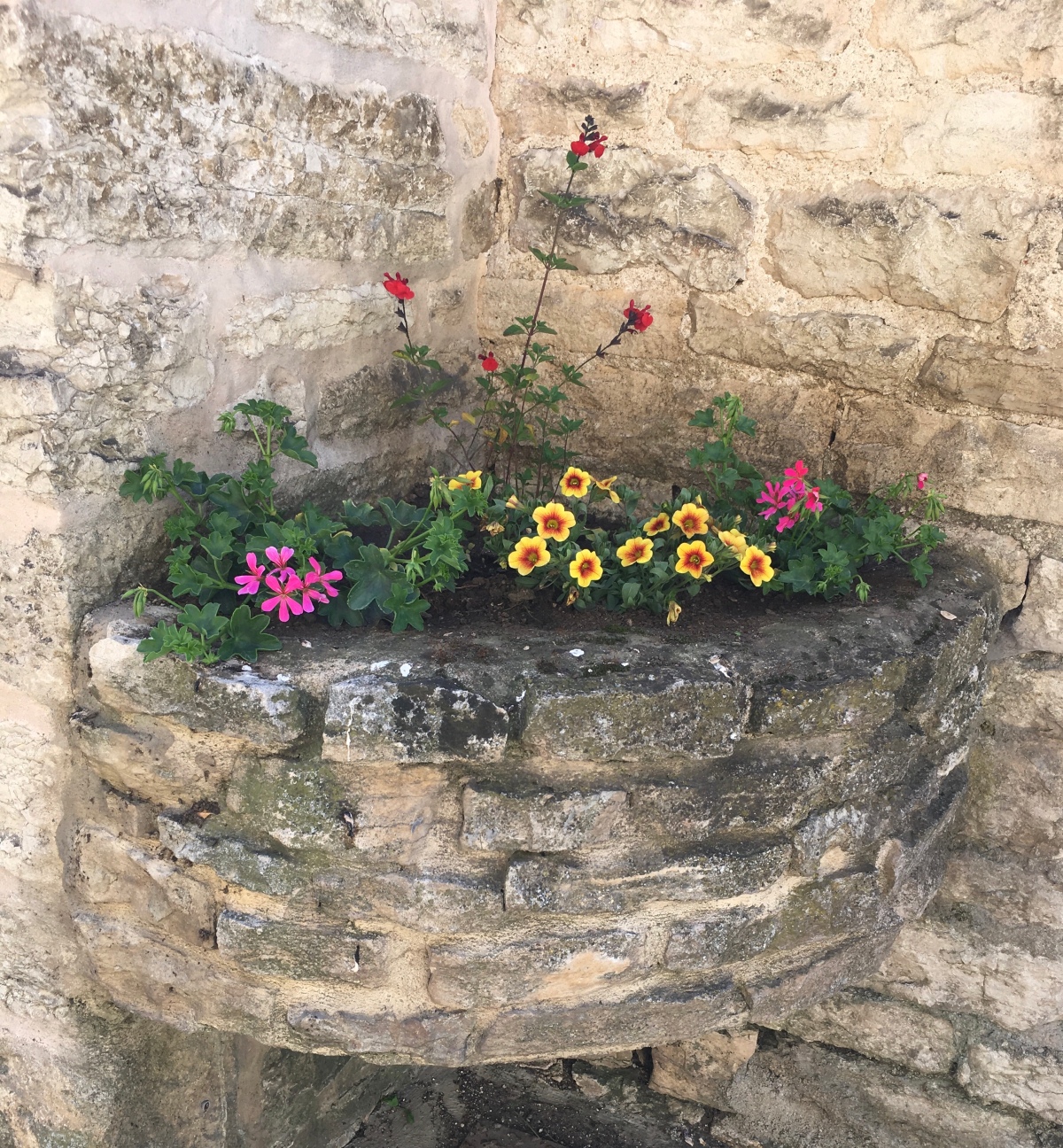 We finished up a delicious lunch of local trout, vegetables and a fig tart, along with a glass of the regional wine.

We hiked back to take our tour of the Grotto. We were happy we had brought our coats, not only to keep us warm, but to keep us dry from all the dripping water. The photo below is of one of the first formations we saw. There are several layers of galleries through the limestone strata. There are also a number to chimney’s, the highest being 30 meters (98.5 feet) that goes through to the surface.

These formations are called the Bèze andouilles or Bèze noodles.

In the winter the caverns are closed, as the water flow rises to the ceiling. The water is now several meters deep, but is so clear that it’s like looking through aqua glass. The boat we took is pulled along on a rope system so as not to contaminate the water with motor oil or gasoline. The water throughout the system is potable and the village works hard to keep it that way. 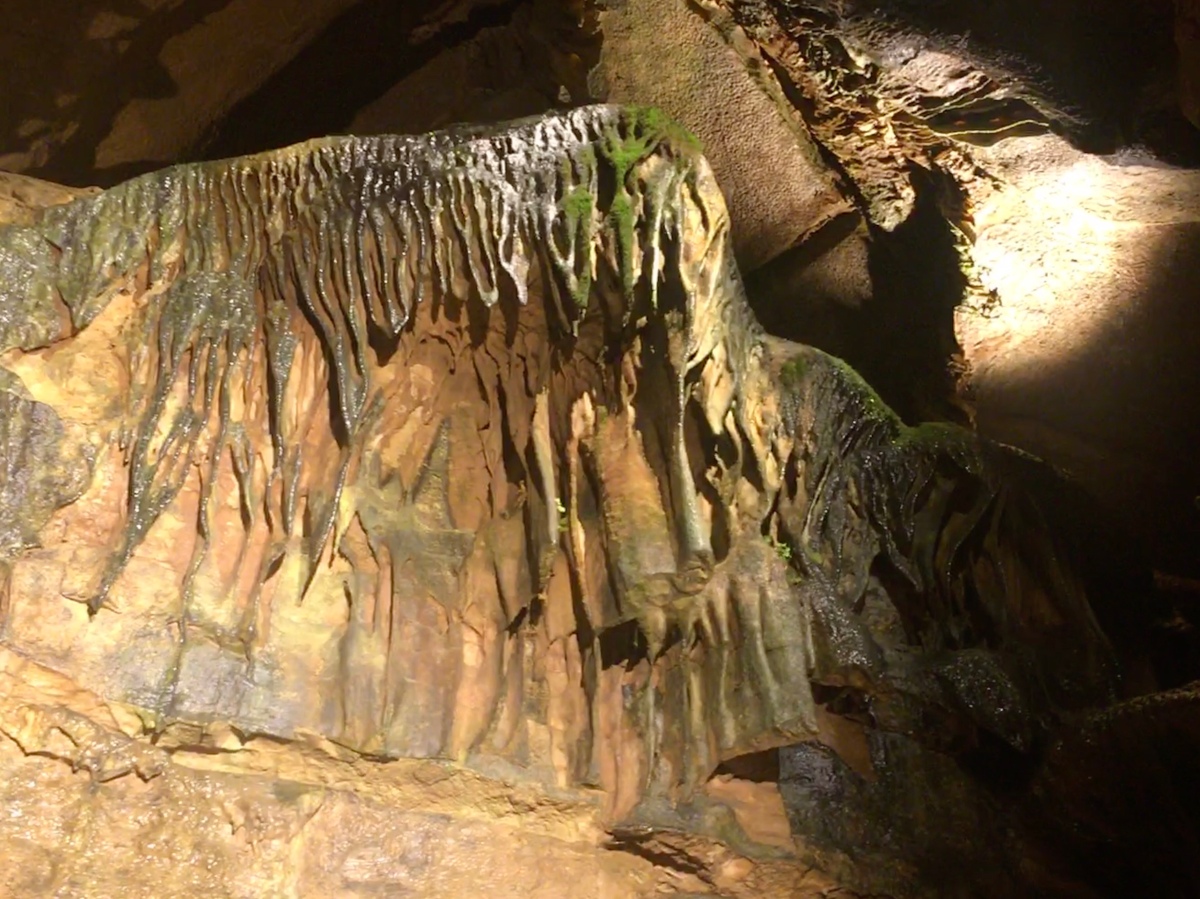 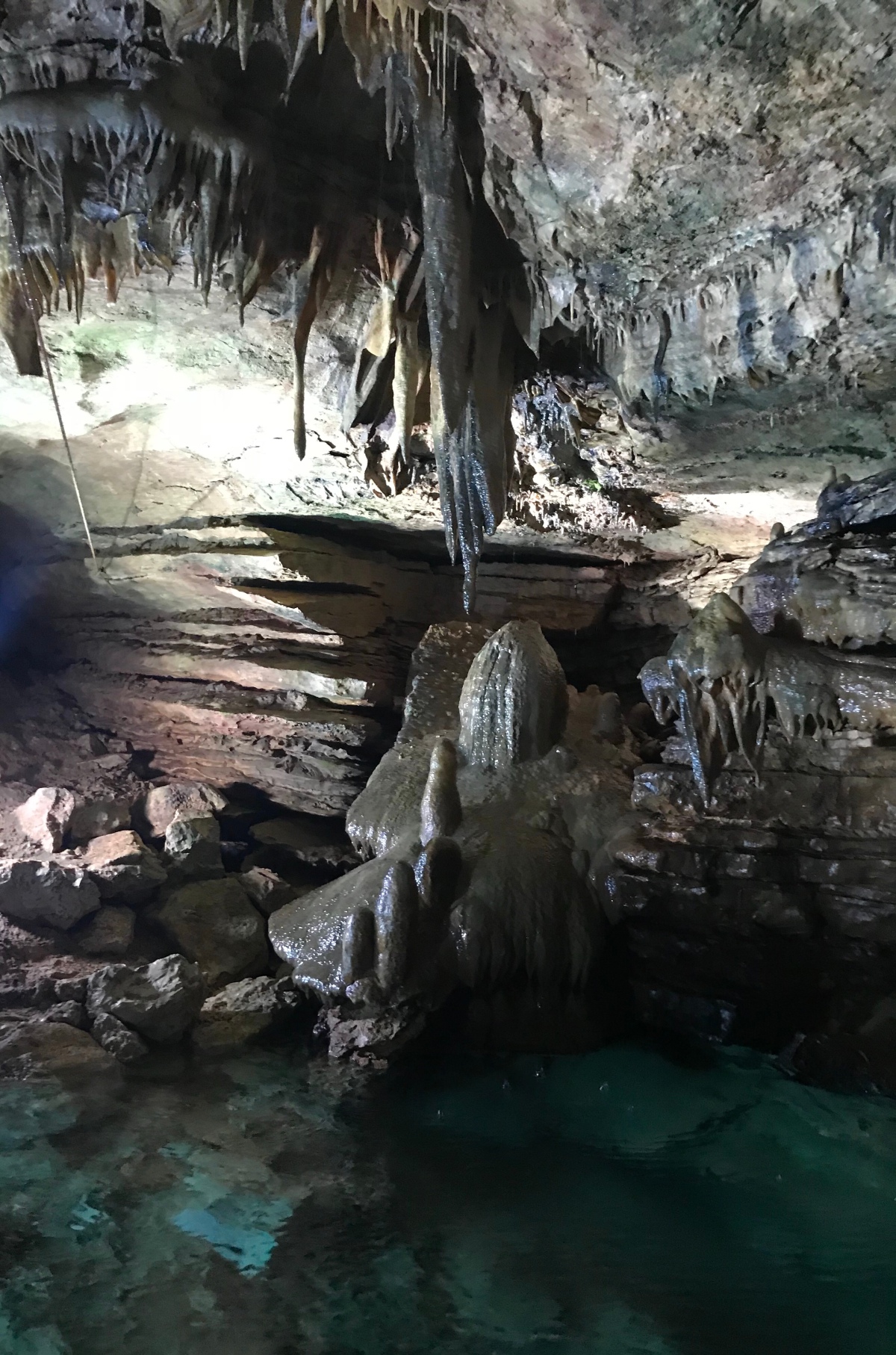 The domed shaped Stalagmite is estimated to be three million years old. 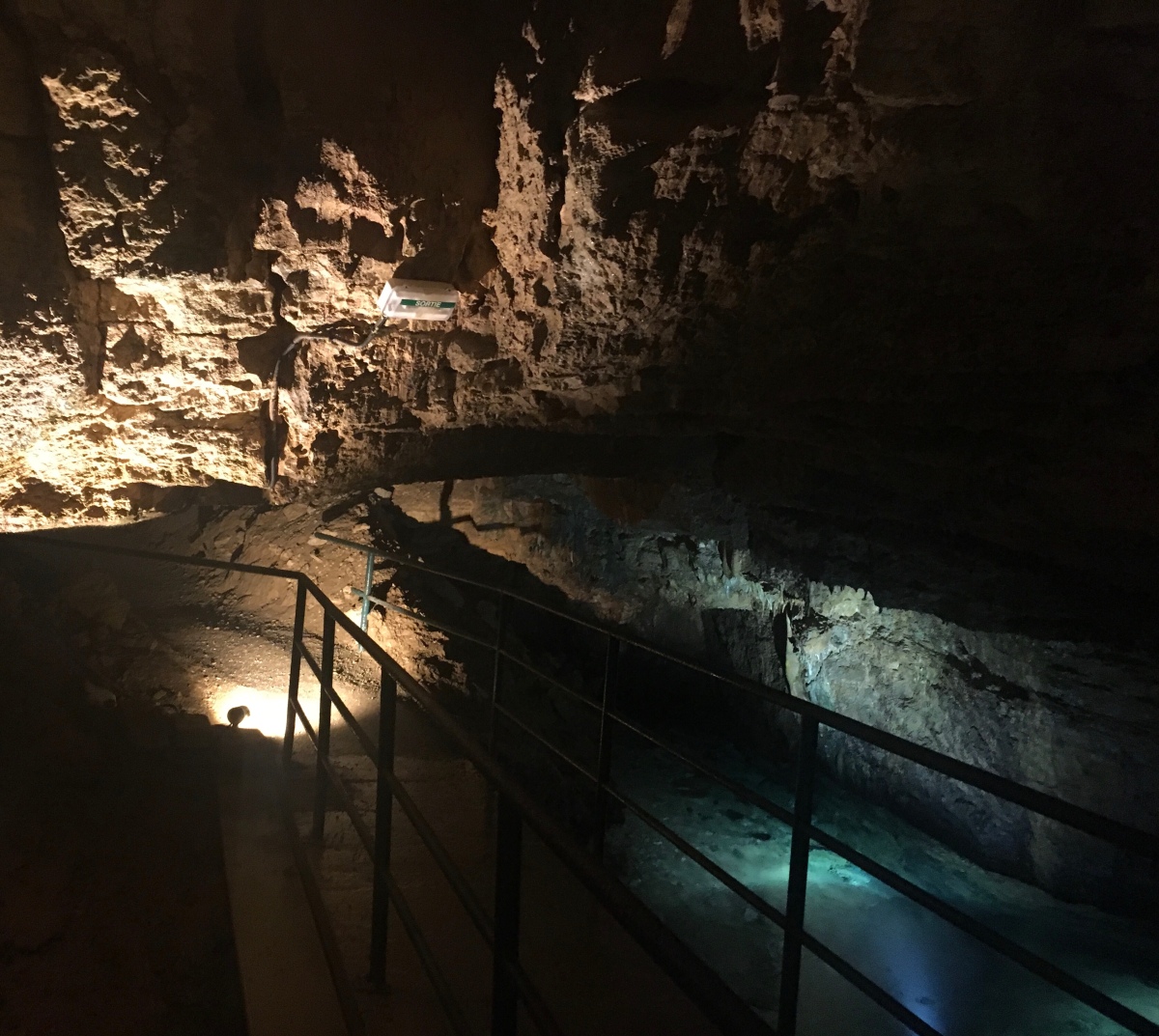 Here you can see the strata in the limestone. There have been many fossils found in the caverns. Below our intrepid guide is hauling us through the water in a shallow draft boat. 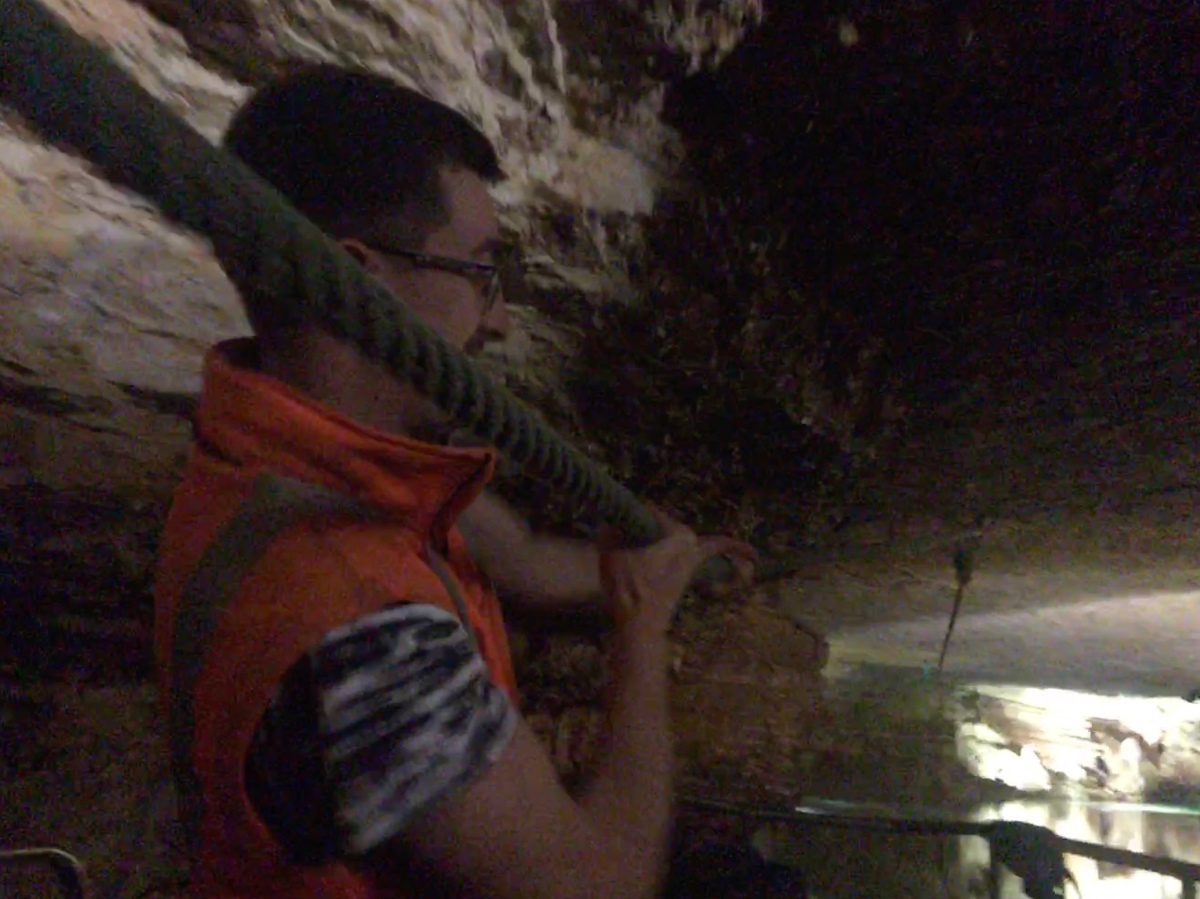 The ceiling was so low in sections that I had to walk bent almost in half to keep from hitting my head. The strata of rock have created unusually flat ceilings in parts of the caverns. 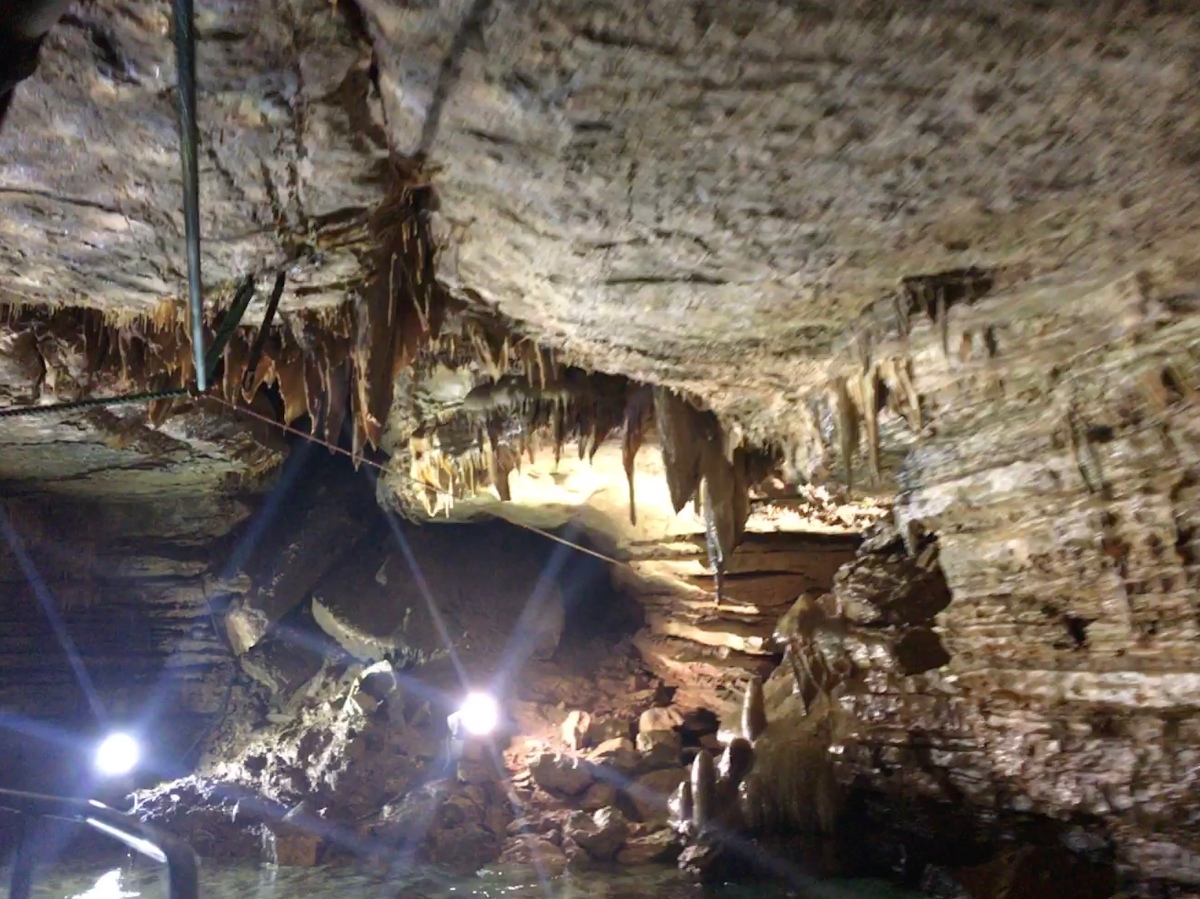 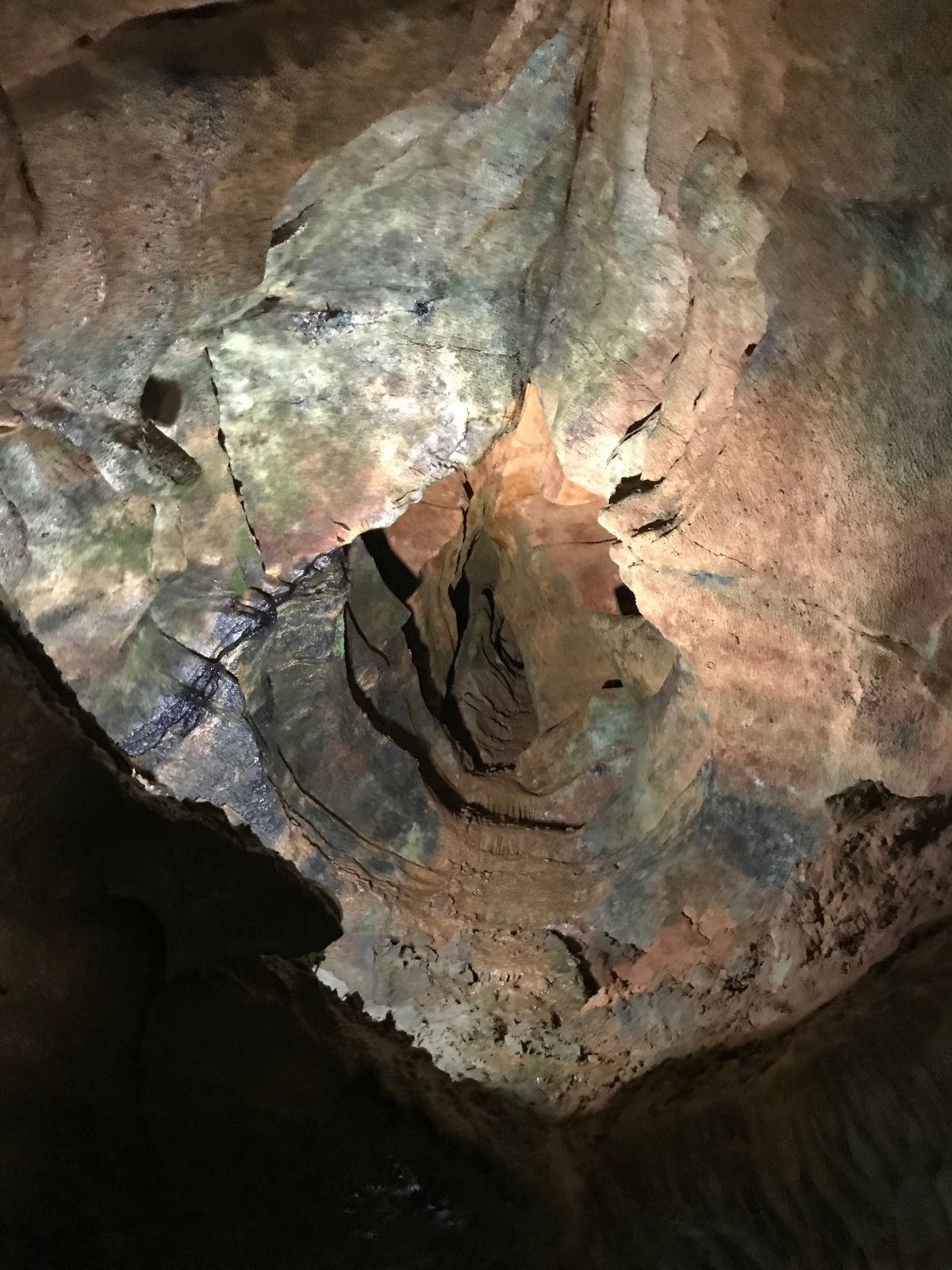 The photo above is the 30 meter chimney that runs to the surface. 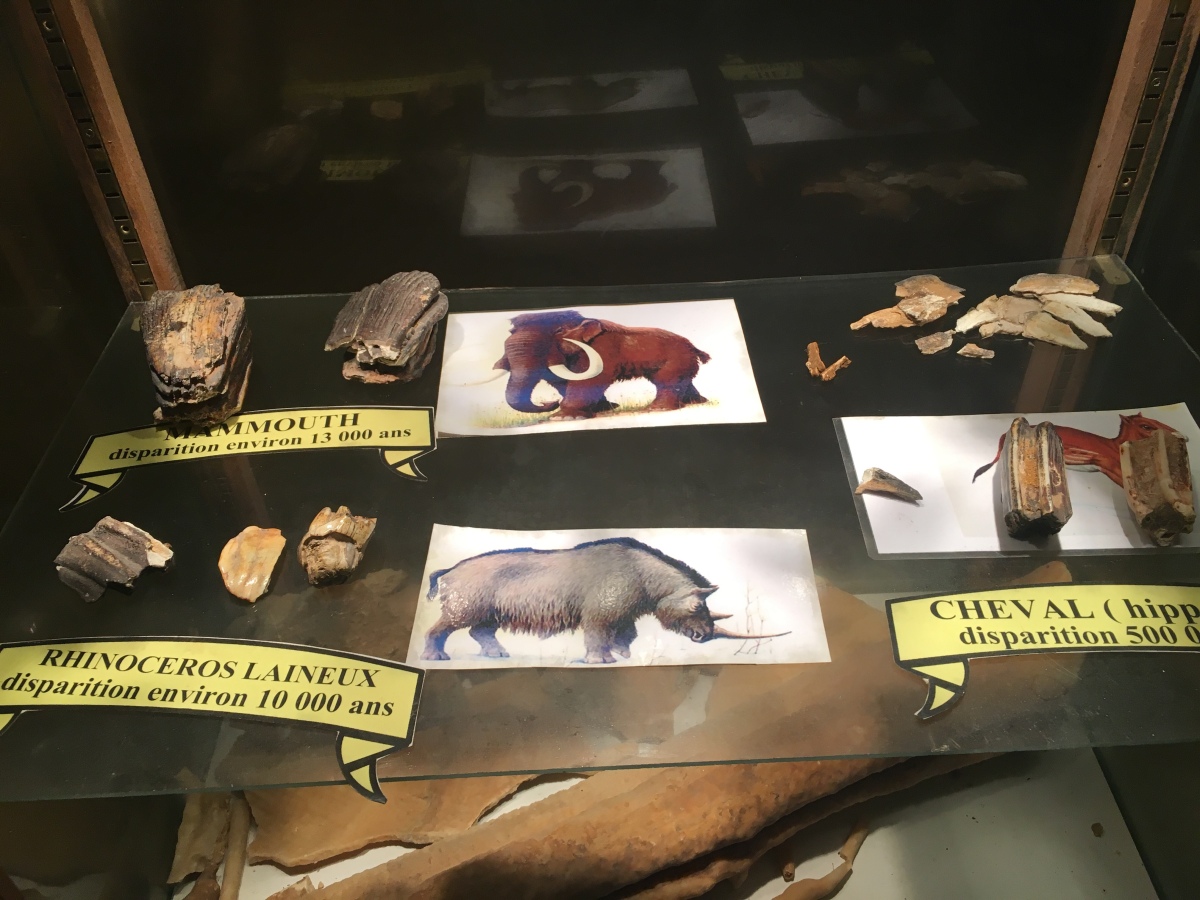 We had a very enjoyable and interesting day. Our drive home was about an hour and we popped by the bakery and store for supplies to eat in tonight.

A couple photos close to Meursault on the drive home. Au revoir, until tomorrow!

One thought on “Mustard Fields Forever….”