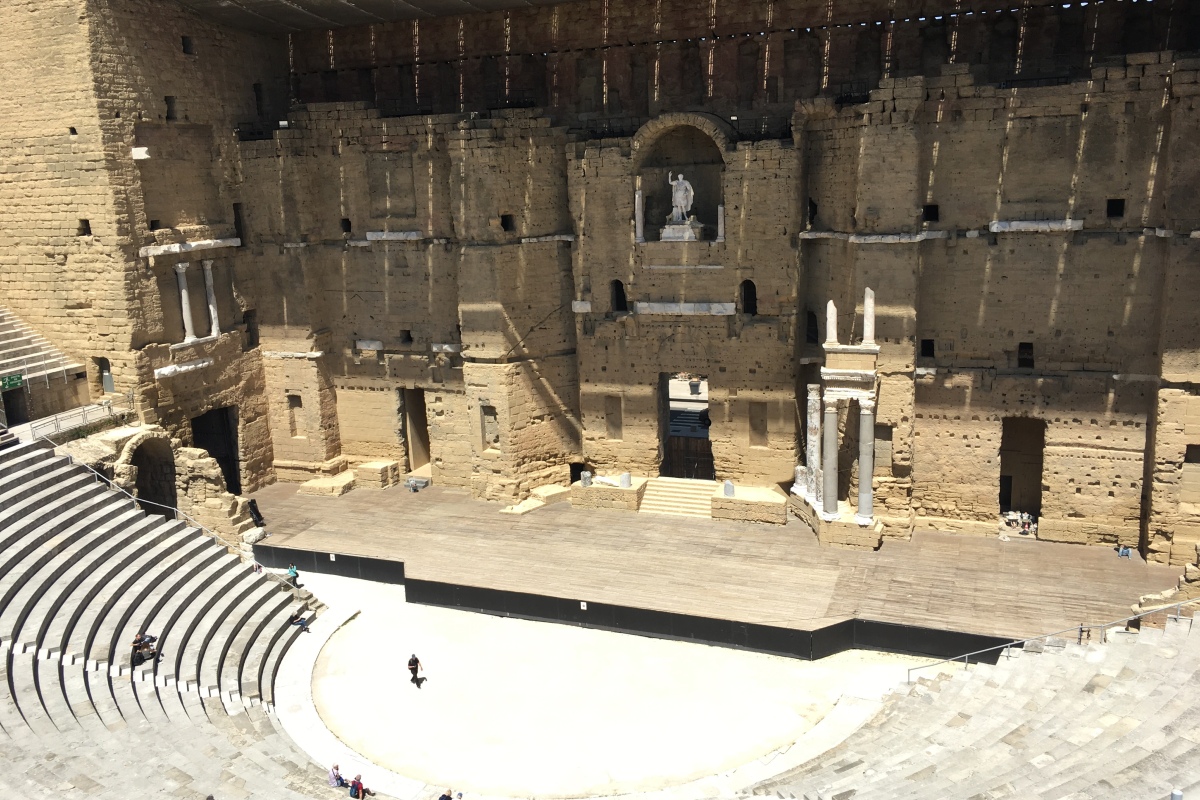 It’s Or-aahn-ge in French. Orange was about a 40 minute drive from Venasque. The main attraction being a full Roman Amphitheater and Roman Triumphal Arch. Suzanne reminded me we are here in France to sit at little tables drinking Campari Spritz’s and watching the world go by, but she was a good sport and put up with my love of culture and stair climbing. We timed our Orange trip for today, so we could also take in the weekly market. We lucked into a parking place a short distance to the market.

I really was enamored with this gentleman and his knife, scissor sharpening business run from his van. He was really nice and waved that it was OK to take his picture.

As we had done the big Isle-sur-la-Sorgue (this spelling is a correction from the previous blog) market on Sunday we didn’t spend too much time here. It was off to the main attraction depicted in the feature photo. This is one of the few intact Roman Amphitheater’s remaining in the world. It was built during the reign of Emperor Augustus in the 1st century AD.

The stage had a curtain that was raised from the floor to hide the stage from the audience. This entire facade of the stage or posteaenum is 103 meters long, 1.8 meters thick and 37 meters high (338’x5.9’x121.4′). When built the facade would be covered with mosaics and relief sculptures. All the nooks would have statues and there were originally 76 columns on the facade and stage. The large statue in the nook over the center doorway was reconstructed with fragments found in the area, it is a representation of Augustus, but in is believed to actually be a restoration of a statue of Apollo. The heads were removable to make altering the statues to new political realities easier.

These partial artworks were found in excavation under the Amphitheater and were originally part of the facade.

We went to the Orange museum of history and were able to view pieces of the Amphitheater decor, along with excavated statues, mosaic flooring, fabric printing displays and art by famous local artists.

The cyclops and sphinx statuary below was placed on tombs to frighten off thief’s.

The artwork in the museum is by Albert De Belleroche and Frank Brangwyn. 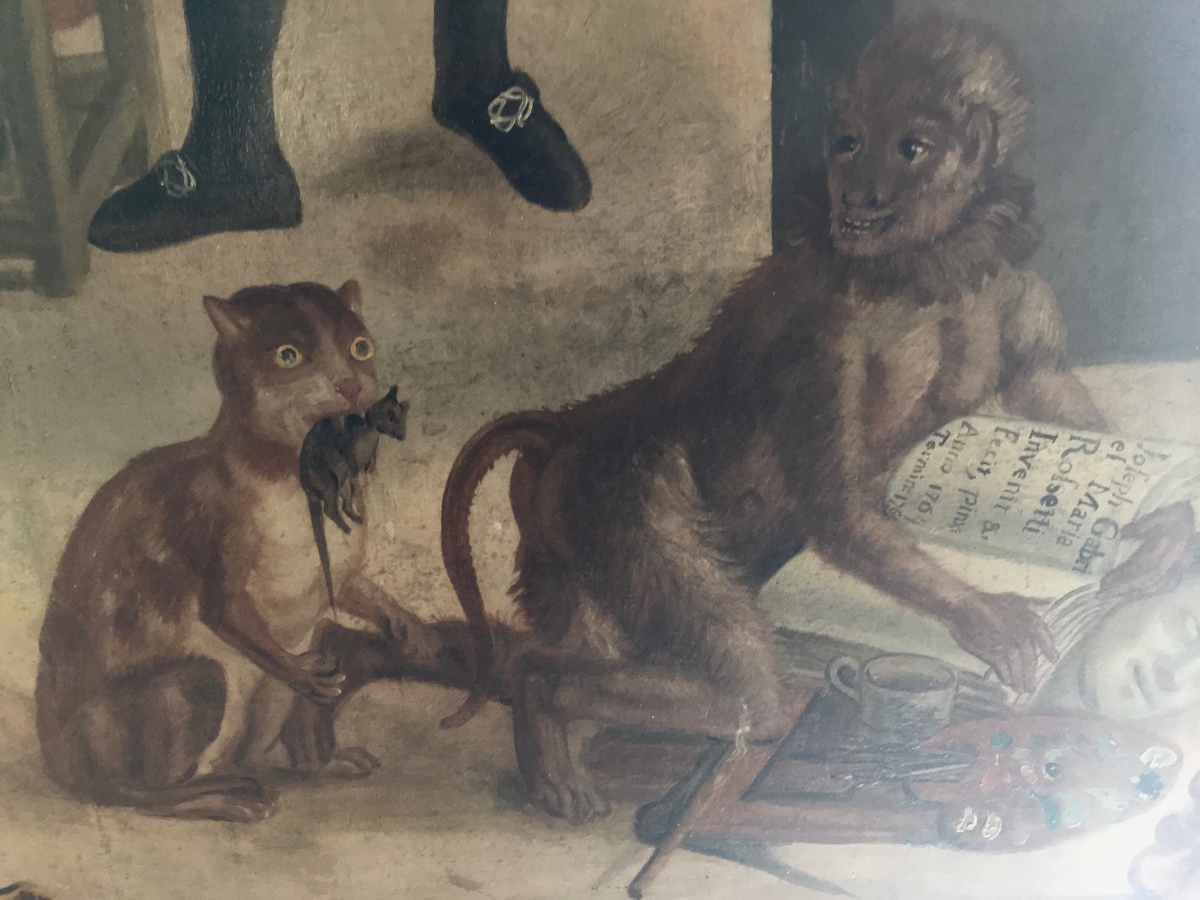 This bazaar detail of a painting in the museum shows a monkey reading a book, a painters palate next to it with a cup of tea. The book is resting on a man’s head and the cat seems to be offering the monkey it’s mouse. Somebody had quite the imagination.

We stopped for lunch at a new little cafe. My lunch was good, but Suzanne’s quiche was not. We had an excellent cucumber gazpacho and chocolate mousse. This is the first day of the trip that Suzanne wasn’t in need of her security coat. Voila!

After lunch we took a quick walk up to see the Roman Triumphal Arch. This arch was also built in the time of Emperor Augustus, around 27 BC to 14 AD. The arch is decorated with Roman battle scenes as can be seen below. 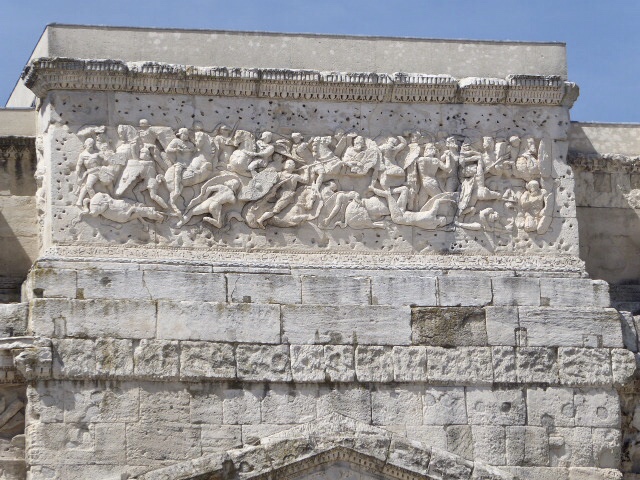 On our walk about town we ran across this beautiful old opera house.

We were ready to head home after 5 hours of sightseeing. Tonight is packing for tomorrow’s travel day to Lyon where we spend one night before heading to Burgundy.

One thought on “Outing to Orange”