Today is a our trip out to Tahuata Island to visit 2 villages and have a picnic lunch on a good swimming/snorkeling beach. The beaches out there are white sand, because of the coral rather than volcanic rock sand.

Our first stop was at the village of  Vaitahu which was tiny, with a charming church and adjoining cemetery. There were two stops at craft centers, but no one in the group seemed very interested in buying anything. There aren’t a lot of pearls in the Marquesas and most crafts involve carved bone, pods, seeds and tie died fabrics. The local people work with what they have at hand, but unfortunately it doesn’t seem that appealing to tourists. 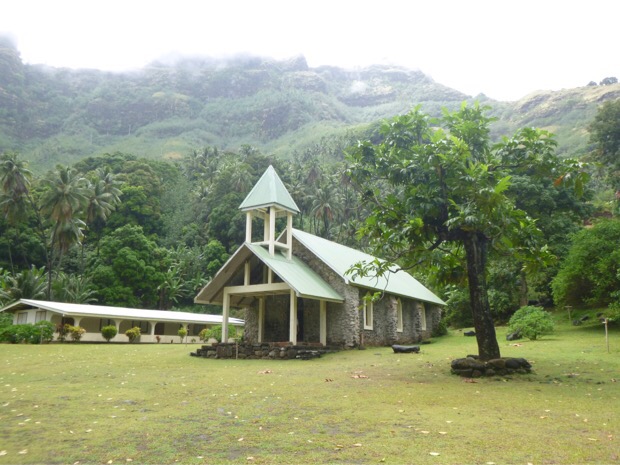 Our boat load consisted of our guide, Hamata (on the Ukulele), a French family with 2 little boys, JP and Marketa, John, Pete and I, plus the captain and boat hands. Although it was raining when we loaded up, the day cleared and we ended up having a lovely time for the 8 hour trip. So happy the day cleared, as we were all three having visions of a repeat of our boat ride to Taha’a in pouring rain and high winds.
Our second village stop was Hapatoni a larger and more industrial place with a small port undergoing reinforcement, of course the village church, modern ceremonial platform and carvings.

Off to the beach for 3 hours of swimming and snorkeling. Our open air changing room is the metal building to the right.  The little house belongs to Hamata’s family, his father and uncle were mayors of Atuona, his Aunt runs the Gauguin museum, and the connections go on and on.  This is the way things are run in the South Pacific.

Lunch was grilled chicken, fish, salad, raw fish in coconut milk, fruit and rice, plus spiked fruit juice.  I partook very little of that as we had been very naughty the night before, having a great time on the terrace of our hotel restaurant with JP and Marketa and a very drunk local lady, who kept trying to light a hand rolled cigarette off the electric candle on our table.

A bumpy but OK boat ride back to port, where the Aranui 5 was docked to off load shipping containers and give their cruise guests a few hours off the ship. A subdued evening, we were back in our bungalow early to pack for our 3 hour flight to Tahiti the next day.

Decided to squeeze in a trip to the Gauguin museum before checking out at noon and transferring to the airport.  All the paintings below are self portraits.

Gauguin is one of my favorite post-impressionist artists and as many gifted artists he was not the nicest person or most upstanding citizen.  After breaking with his Danish wife, he took a 13 year old “wife” in Tahiti and later a teenage lover in Paris that was half Indian and half Malayan, Annah the Javanese. These were not his only native or teenage lovers and he has left descendants on Tahiti and Niva Oa. He died on Nivea Oa in 1903 of complications from Syphilis, heart disease or an overdose of laudanum. Gauguin painted with and corresponded with Pissarro and briefly with Van Gogh. I fact Van Gogh was very jealous of Gauguin’s artistic ability and confronted him with a razor the day of the infamous ear incident.  Gauguin’s art evolved to the ‘Cloisonnism’ style of flat area of color and bold outlines, similar to the look of Medieval cloisonné enameling technique.  Degas was a great supporter and was instrumental in organizing a exhibit of Gauguin’s work in Paris. Gauguin enjoyed limited commercial success during his lifetime, but with the posthumous support of his dealer in Paris.*

All the paintings in the museum are decent reproductions and the originals reside in collections and museums throughout the world.

It has been a very long day with our flight and 1 1/2 hour taxi drive to Tahiti Iti and the Vanira Lodge, a Hobbit fastness in the mountains overlooking the sea. The photos are of our roof and porch with open air bathing. The featured photo is by Pete Bowling of the evening sunset. 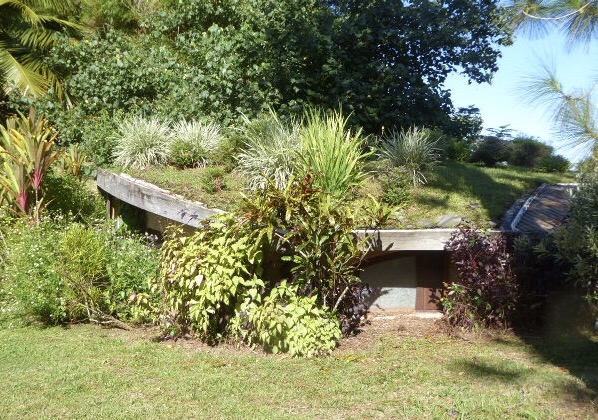 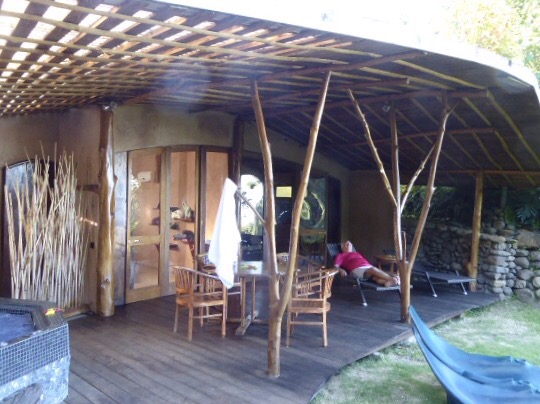