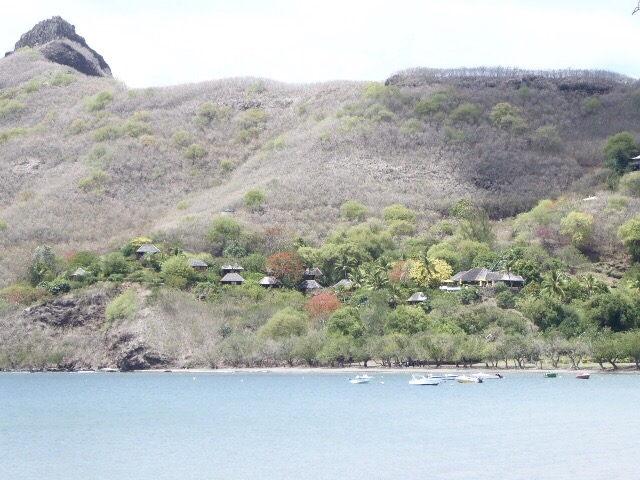 The first full day in Nuku Hiva, we decided to walk the bay, looking for a certain restaurant and a new hat for John. He has been doing without, but it’s hot and sunny here, so a hat’s a necessity. The walk was about 6 miles round trip and hot, hot, hot…..not that I’m complaining, with all the rain we’ve had on the Society Islands.

At one time it’s estimated that there were 80,000 Marquesans on Nuku Hiva, but with illnesses introduced by the Europeans the population shrank to about 3,000. In 1813 American Captain David Porter arrived to claim the island for the United States.  When Porter, who was supposed to be capturing British freighters and whalers, announced the claim before congress. Congress renounced the claim shamed that the sailors would have habituated with the native women. Evidently the French weren’t so fussy.

Below is an etching of a Marquesan warrior circa 1813.* 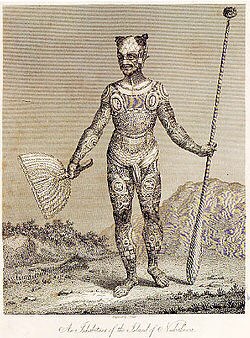 The old church that John had seen on his trip here 45 years ago had been rebuilt due to storm damage. The original doors and entry portico had survived.

We found a small local market that had a hat that fit John. The crown was so high he looked like Hoss on Bonanza.  The market and local crafts store was located near the pier.

There are ceremonial platforms and carvings in the waterfront park that we took in on our perambulation around the bay. This site dates to the end of the Eighteenth Century. It’s famous as the place where ceremonies were conducted between natives and Europeans. 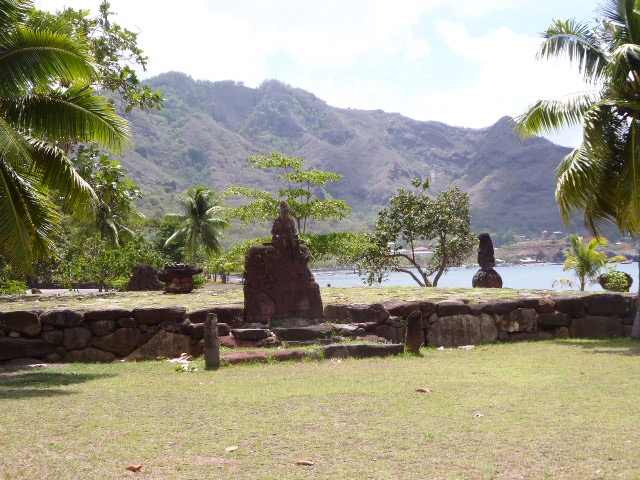 By the time we got back we were bushed. Cold showers and lots of air conditioning were in order.

A lazy day with not much going on.  We wanted to go out on the water in a hired boat, but evidently that’s not possible here.  The hotel has several excursions, but the one we were interested in wasn’t available, so we stayed in and rested up.

A cruise ship/freighter pulled into our bay.  It shows up every 3 weeks carrying passengers and cargo to the island.  It even has it’s own crane for off loading larger containers.  The back of the ship has suites and there is a swimming pool on board.  This is a great way to see islands not accessible by any other means. 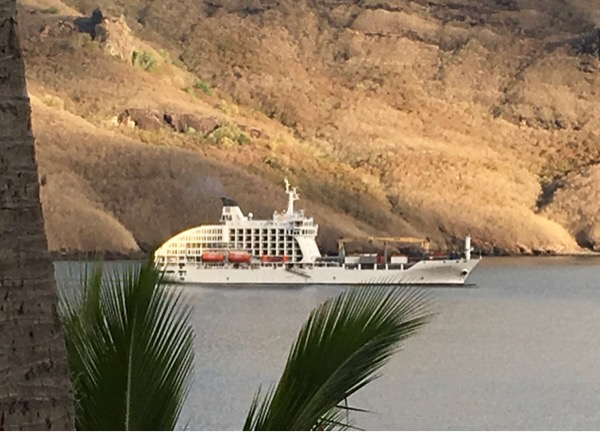 The featured photo is of our hotel, shot from across the bay. Our bay is one of two volcanic craters on the island.