The plan was to rent a car and drive to the archeological site of Taputapuatea, but after some discussion with Daphne from Switzerland (although she’s French) we decided to hire a guide with car so we would be able to identify what we were seeing.

We lucked out and got Giovani as a guide. He was named by the French/Itailian nurse that helped deliver him. The drive to Taputapuatea was through the island crater, which is very large and is the agricultural breadbasket of the island with it’s rich soil. Although it’s hard to see in the panoramic photo the crater rim was surrounding us during our drive.

As Raiatea was the religious center for eastern Polynesia the main marae was used for gatherings of people that had traveled to Raiatea for commerce, social and religious reasons. The kings and priests stood on the higher ceremonial level and the people stood below. These marae have been restored after their destruction by Borabora warriors. The Maori of New Zealand still use their marae, but in Polynesia the marae were abandoned with the advent of Christianity in the 19th century. To the Polynesian people marae are still considered Tapu or sacred and holy. Giovani referred to this marae as the international marae.

This is the navigators marae. Pete checked his compass app and the vertical stones are positioned north to Hawaii and east to Easter Island. In the photo below you can see the vertical stone on the lower level that lines up due north. 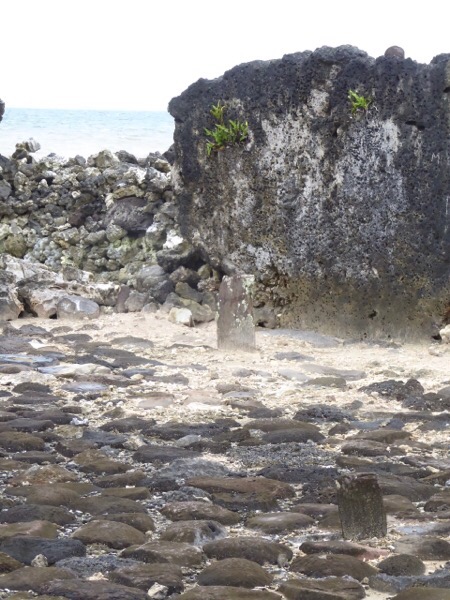 People from all over Polynesia have gathered here in Raiatea to demonstrate and discuss the meaning of Polynesian tattoos, which have been a part of the culture since ancient times. Giovani drew us a picture of a sharpened oyster shell with a hole drilled at the top for a secured stick. This would be dipped in a burned nut ink and tapped with another stick into the skin. This was an excruciating process and risk of infection was high. 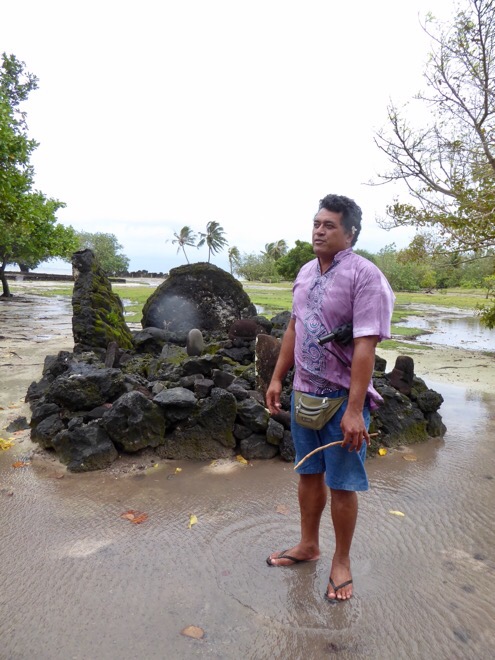 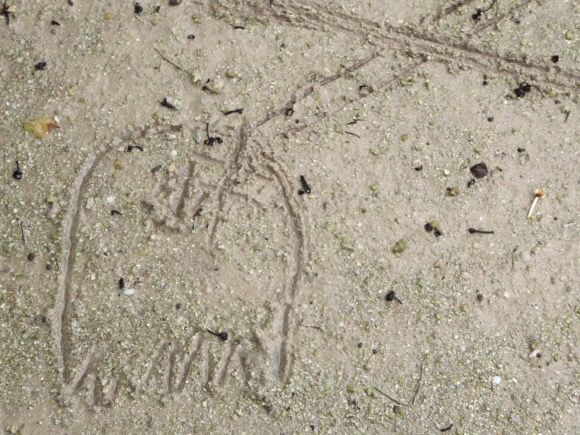 As you can see from the standing water in the photo of Giovani, we were having another stormy day in Raiatea. The photo below was taken from the lobby of the hotel while we awaited our tour.

This was our big adventure to Taha’a. The itinerary was to be picked up at our dock by a boat, go to Taha’a and see a pearl farm, drift snorkel the coral gardens channel, have lunch on a motu islet, and then finish up with a visit to a vanilla farm. We started out pretty well and met a talking Dalmatian on our way to the boat. We could hear him vocalizing before we ever got to the dock. 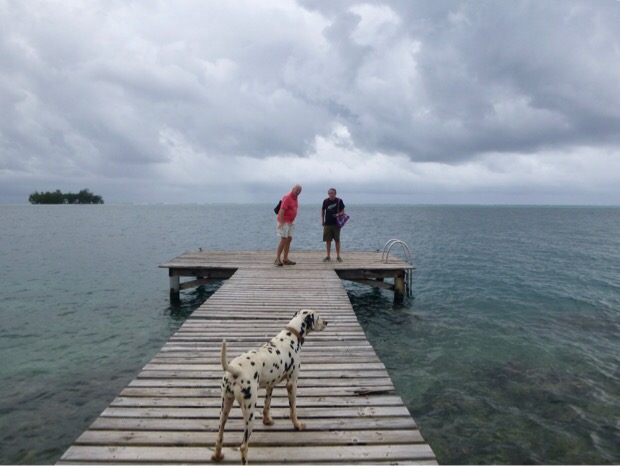 We had three other French guests from our hotel join us for the trip. In all it was 5 French and 5 USA citizens on the boat. Alex was our guide and captain for the day. 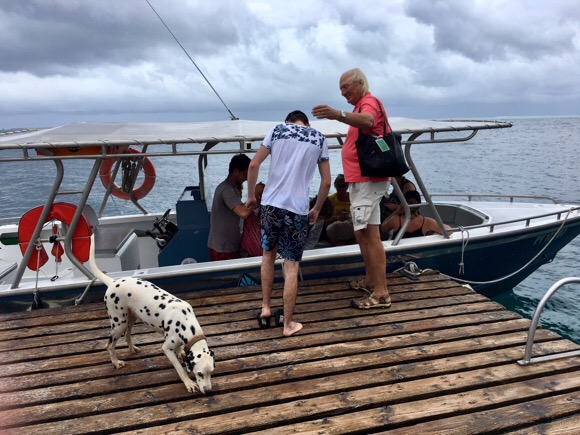 The 30 minute ride over to Taha’a was pretty uneventful, as was our Pearl Farm visit where we learned how Tahitian pearls are produced using a round shell core. The core is planted in the grafted oyster gonad. Japanese oysters are imported for their colorful interiors, which influence the color of the pearl. It takes 4 years of work to produce a lusterous black, gray, blue or green Tahitian pearl. The quality of the pearl depends on shape, size, luster, and imperfections. There are baroque, semi-baroque and round pearls. The farm we visited produces 20,000 pearls a year, of which less than 10% are perfect or A quality pearls.  In the US pearls are rated AAA, AA and A. In Tahiti they are rated A, B and C. In the photo below the baroque’s are to the right, semi-baroque in the center and round to the left. The large pearls of 16mm of A quality only number 6 out of 20,000 pearls/year.

On to our drift snorkle through the coral gardens. It started raining and the wind was picking up, but we got anchored downstream of the channel walked to shore and hiked to the far end where the current was strongest from the ocean, holy smokes what a ride. The minute we plunged into the channel running down the center of the garden, we were moving quickly and had to be careful not to get ensnared in the coral on either side. Especially people like me that were more focused on coral, fish and pictures than were I was going. Here’s Pete in front of me, on the third trip I finally learned to keep an eye on him since he knew where he was going. 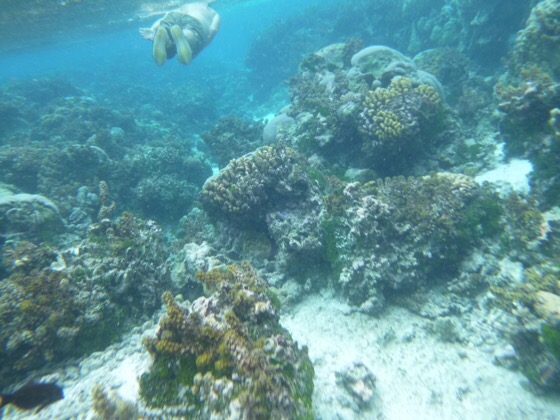 This was literally like swimming in an aquarium. The water was clear and beautiful, I can only imagine what it’s like on a sunny day. 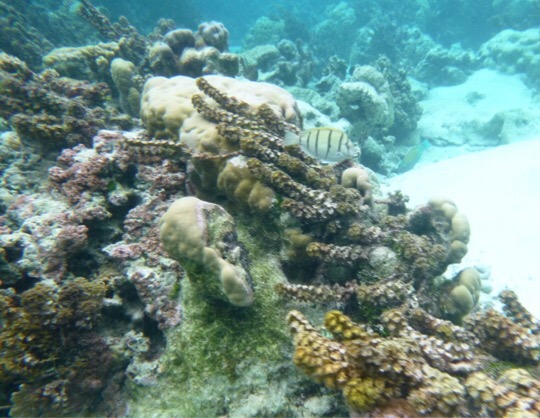 These are two Butterfly fish with an eel that popped out down in the right hand corner.

After snorkeling we were off to lunch, but the problem was that the winds had picked up to 40 miles/hour, the waves were big and people were getting slammed, thrown off their benches, covered in spray and rain.  John made the best of it with his mask and snorkle.

We pasted a sailboat that was hung up on coral or sand. He managed to pull free, just as we were coming around to see if he needed help. 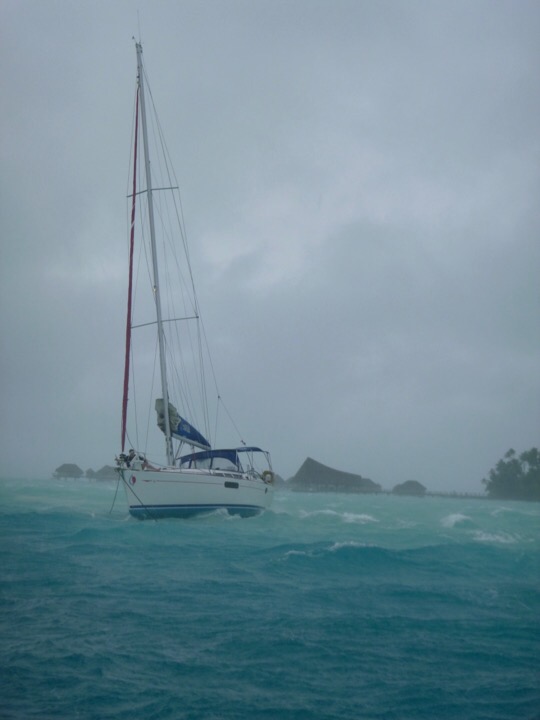 We ended up having to turn around and approach our lunch from the other side of the island, as the water was just too rough for our little boat.

After a good lunch on the Motu the intrepid Alex fired up the boat and took us across to Taha’a to visit a soggy vanilla farm. We traipsed through the mud to see the vanilla vines growing up small trees that shade them from the sun. The vines have the long narrow leaves and are planted 4 to a tree. The harvest is in April and May, after each blossom is hand pollinated to create a bean. Once the beans are harvested they are put out on metal sheets in the sun for about 2 hours, then are put in a cloth sack and closed in a cargo container to sweat out excess water. Once that is done the bean is hand massaged so the contents have a usable consistency. This is a very labor intensive process and the finished beans sell for $500/kilo. They do not use vanilla extract in Tahiti. They use paste and dried vanilla.  I chose to get the dried and a pinch is used instead of a teaspoon. 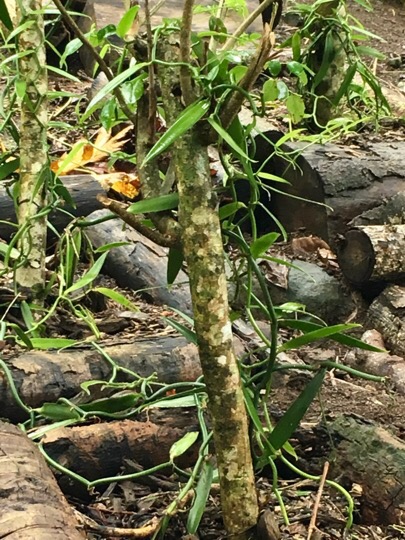 Our trip back to the hotel was uneventful. We are all downing Tylenol, from the beating in the boat. Tomorrow we are off for Papeete, Tahiti for an overnight before flying to the Marquises.