I have a correction on the size of the Cook Islands. I gave you the square kilometers instead of the 690,000 square miles. Still a huge difference between the amount of ocean the Cook Islands and the Society Islands occupy.

We are so secluded here in Huahine, plus with only one full day, we have decided to just stay put at The Royal Huahine and enjoy the water and sun. This is the quintessential lazy day with a couple hours of snorkeling.  The water off our beach is very shallow and filled with coral. I found a large Box Fish that was greenish yellow with blue spots.  It was probably about 7 or 8″ long and reminded me of a oversized lemon cucumber.

Pete outdid himself today with 6 ocean swims. Decided on appetizers for dinner in the bar where we met one of the couples that was sailing on one of the Trade Winds catamarans around the Society Islands. Evidently it’s a sailboat time share and Trade Winds has large sailboats all over the world.  Everyone seemed to be having a great time with 6 couples on the boat.

This is a photo of the dining room shot towards the bar on the far right.  The main lodge had several interesting paintings that I enjoyed. 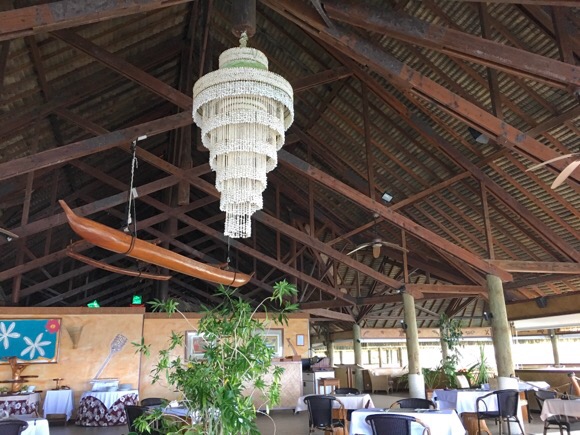 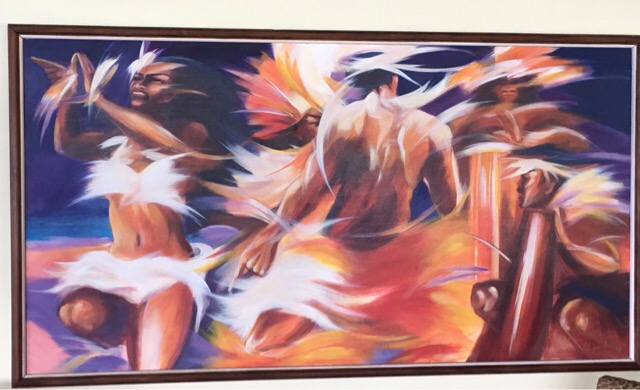 More of the grounds and bungalows. John, Pete and I had side by side beach front bungalows, with covered decks and killer views (second photo down). 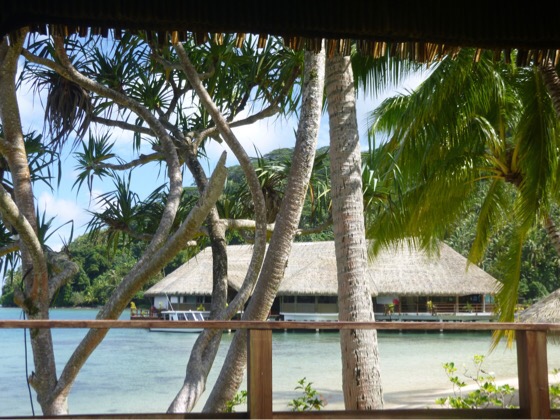 Up at 6 am to get ready for the boat to take us to the main town of Fare. From there we caught a shuttle to the airport for our 9:15 am flight to Raiatea.

This was another very short flight of 20 minutes. The Raiatea Lodge had arranged our transfer and we arrived for our 3 day stay.  this lodge has a very colonial feel to it with mahogany, large elegant open air lobby and outstanding restaurant.

Raiatea was widely thought to be the cultural heart of the eastern Polynesian islands. The second largest Society island next to Tahiti, it is surmised that many of the ancient migrations to Hawaii, Aotearoa and other islands originated here. Situated on the the southeast coast is the historical Taputapuatea marae complex. In ancient times, already established by 1000 AD, this was the central temple and religious center of Eastern Polynesia. Originally dedicated to Te’aroa, eventually ‘Oro the god of life and death prevailed. This was a site of human sacrifice and the center of a voyaging network. An alliance was made between Raiatea, and several islands to the east and west. These islands had rocks taken from the Raiatea marae to create new marae with a spiritual link to Taputapuatea. Fighting broke out shattering the alliance and around 1763, warriors from Borabora attacked destroying the God houses, marae platform and cutting down the sheltering trees. To this day Raiatea and the Taputapuatea complex are said to give off special energy, we will see tomorrow, as we have arranged a car to visit the site. Restoration of the site started in 1994 and it has been on the World Heritage List since 2017.*

So happy we saved ourselves for dinner. My Langostino with risotto on the left and Pete’s rack of lamb on the right. John had a Carbonara that was wonderful too.

The featured photo is of boat lifts we have been seeing throughout the South Pacific. These lifts are off beaches and in front of private homes. They prevent damage and growth on the hull.

*Wikipedia, may or may not be accurate.