Up early to catch the 7:20 am shuttle for the 40 minute drive to Port Douglas, where our boat the Calypso leaves for the 1 1/2 hour run out to the Great Barrier Reef. This was an all day trip to three different parts of the reef with 1 hour snorkeling at each stop. Looking around at the group of 29, Pete and I were possibly the oldest people onboard. I took my new underwater camera (thank you Santa!). Taking photos underwater had a steep learning curve. I was moving, the fish were moving and focusing was very difficult.  Also with the wave action and current, the water didn’t appear as clear to the camera as it was to the eye. 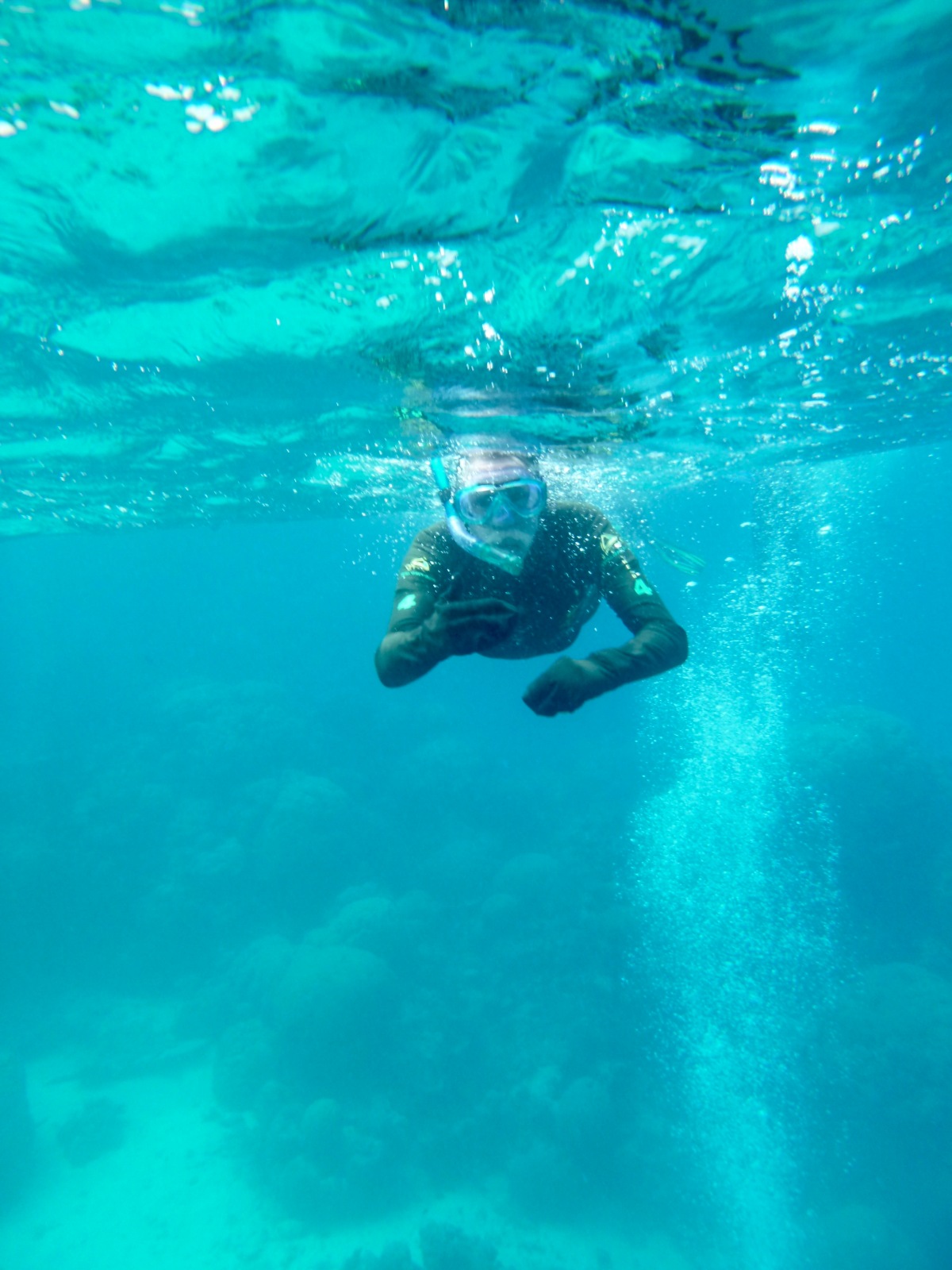 We covered ourselves with sunscreen before leaving the apartment. As you can see in the above photo, it wasn’t necessary. Because it is Stinger season the tour operators required everyone to wear Stinger suits that were full length, with hoods and hand covers. The Stingers, as they are commonly referred to, are box jellyfish that have 10′ tentacles when extended, with millions of exploding cells that fire darts of venom. The Australian species’ venom packs quite a painful wallop and can be quickly fatal to humans. Lycra suits are effective against the the stings, because the cells won’t explode with out pressure and protein chemicals*.

Pete and I snorkled off on our own. We hadn’t signed up to be part of the snorkeling or dive tour groups, so I think we were able to cover a lot more reef area.

According to our onboard biologist brownish colored coral is healthy reef, with the color coming from algae. The pink, orange and mauve coral is stressed and can recover if the water temperature cools. The blue coral has oxygenated algae and is also healthy. White coral has had all the symbiotic algae die off, resulting in the death of the coral.

Our fearless captain is standing to the right of the seated biologist. 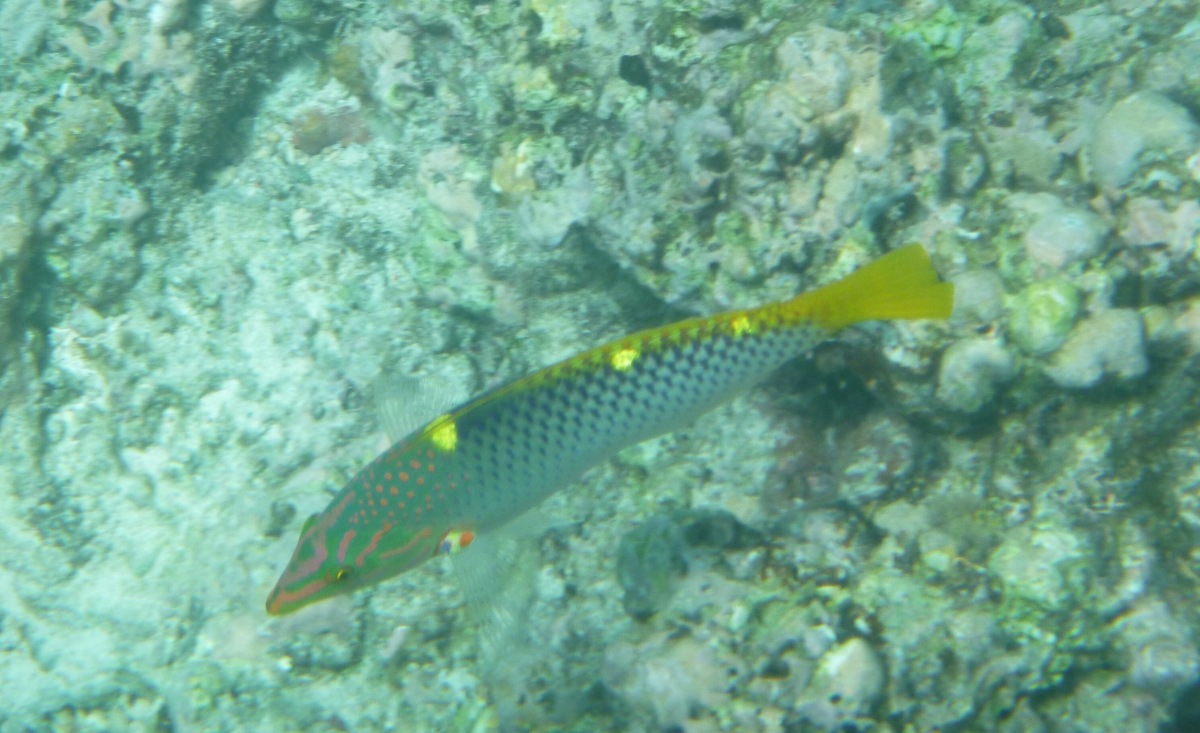 This was such an exciting trip, approached with some trepidation. It had been a long time since we’d done any open ocean snorkeling. Pete got a bit concerned, spending some time corralling me in as I’d go wandering off chasing fish and photo opportunities. Eventually I got better at looking up to see where the boat was located. The boat operators safety instructions asked us to not go more than 45 degrees out from the back of the boat. This is because they wanted to watch us to make sure we were safe, they also had people in the water and a zodiac to come to the rescue. After a stop, we would all briefly stand in place while multiple members of the crew independently counted to make sure we were all back on board. One of the most difficult parts of the trip was getting back on the boat. Even with steps down into the water, if you weren’t careful the strong wave action would slam you into the metal steps, then yank you off before you could get completely out of the water. It took me until the 3rd snorkel to be able to exit the water with any grace at all.

The big guy below is a giant clam, the shell was about 2′ across, you can see the whitish siphon on the right. Thick algae around the edge of the shell was a rich blue with yellow flecks that unfortunately don’t show through the turbulent water. Earlier we saw shells of much larger clams, but this is the only living one we found. 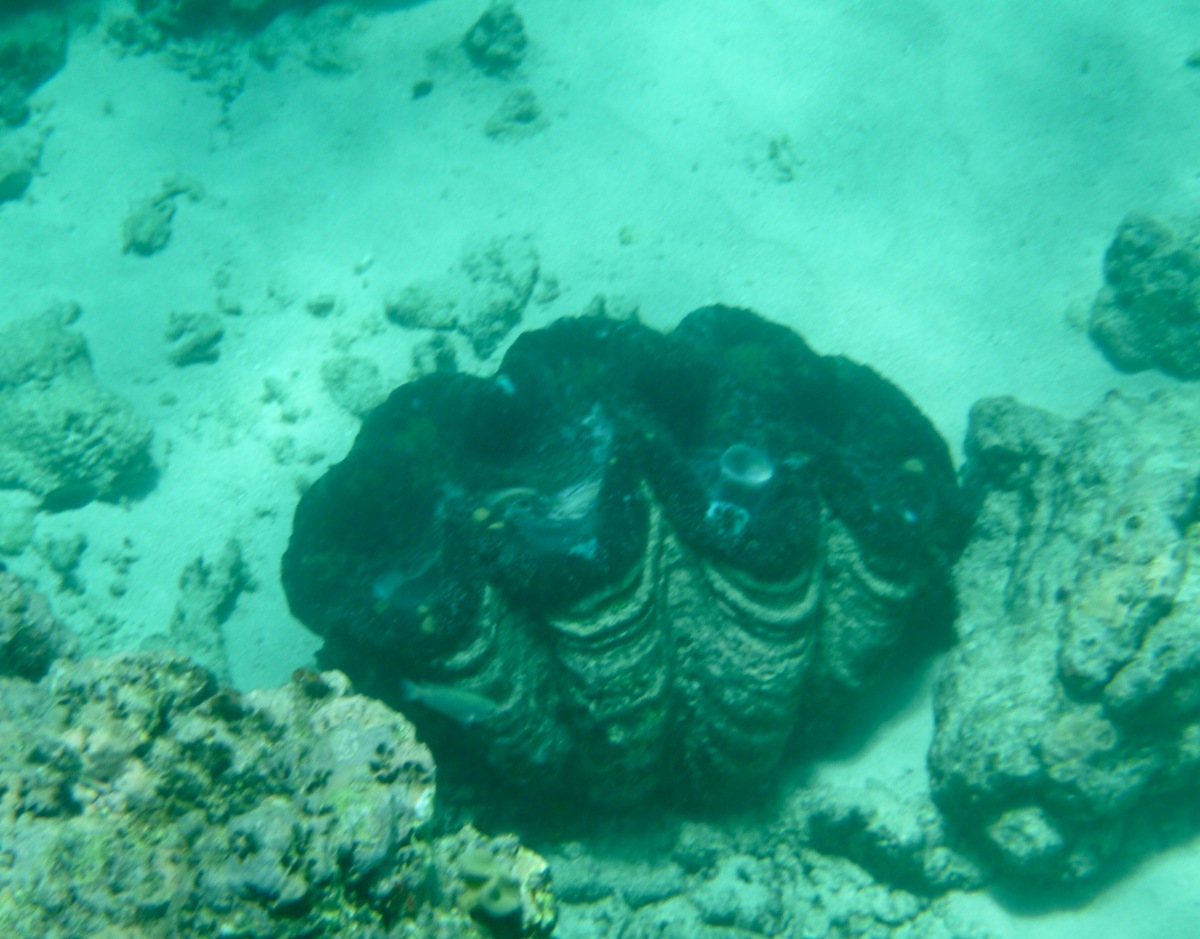 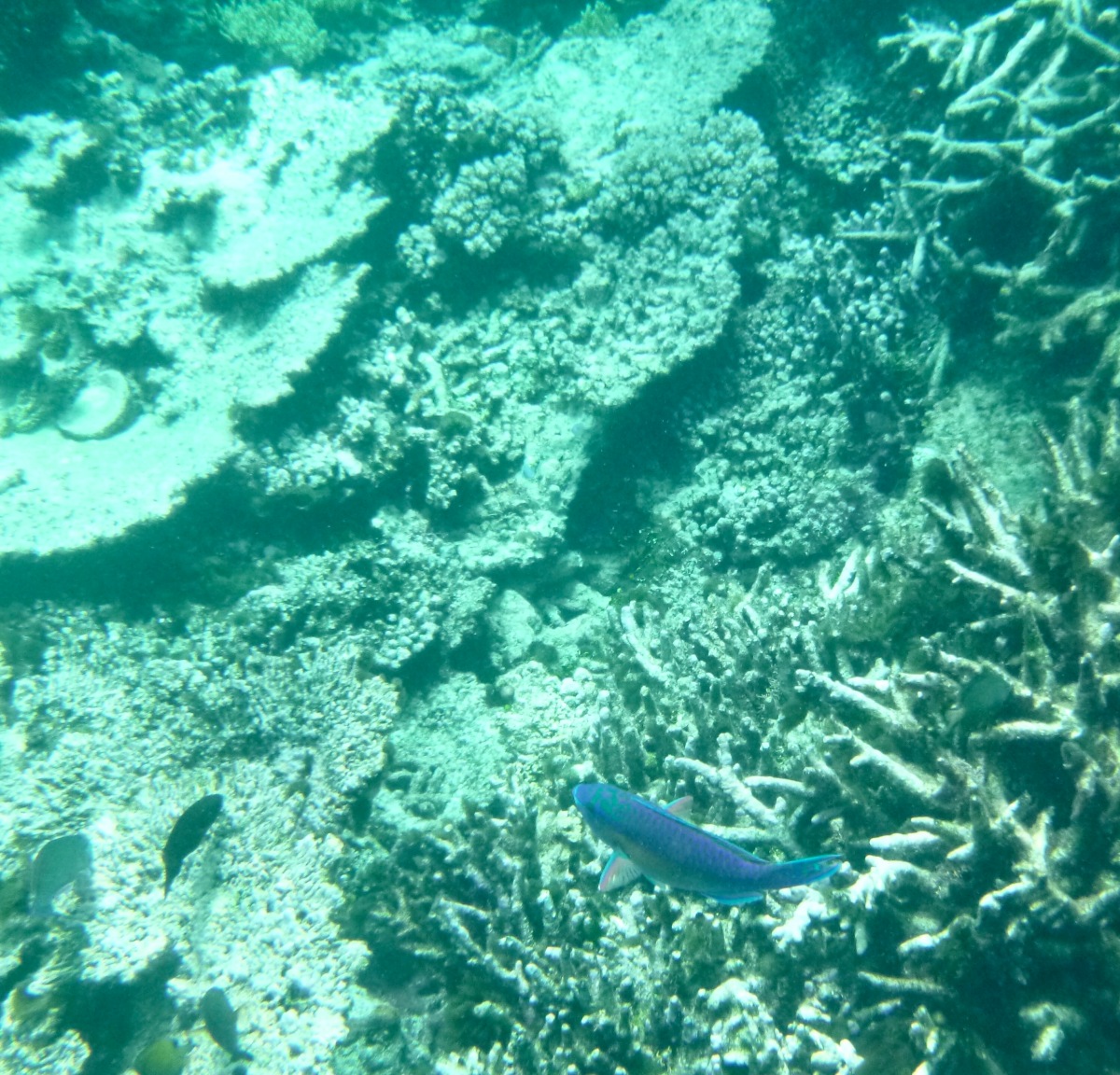 Next time I’ll give Pete the camera for a while. He’s a good snorkeling diver and can get closer to the fish. That’s a big part of the trick with underwater photography.

After a full day we were pooped. Pete picked up some good IPA at the Hemingway brewery located at the marina, while we were waiting for our transport. He has had a difficult time finding his preferred IPA’s.

It was so good to get home and into dry clothes. Dry didn’t last long as it started raining on our way to Coco Mojo’s for a light dinner. We were amused that an Australian woman stopped us of our way to ask for directions, we can find our way to the restaurant and shopping center, that’s about it. One thing for sure is that I’ve been struggling to tell direction. The ocean is on the other side along with the driving, resulting in the perception of North being South.