Days 20, 21 & 22
March 4th-a travel day, up at 5 am for a 2.5 hour, 8:05 am flight from Delhi to Jabalpur. Our last trip with Paramjeet. Suzanne and I both had tears in our eyes as we thanked him profusely when saying goodbye. After arriving in Jabalpur we hopped in a car with a new driver for a 5 hour drive to Bandhavgarh a National Park and Tiger Reserve consisting of 111,691 acres located in the state of Madhya Pradesh. This jungle is much more dense with vegetation than Ranthambhore. We arrived late in the afternoon and rested up from our early start. The lodge is off a single lane paved road, 5 kilometers over rutted, dirt road. As you can see Samode is a classic Safari Lodge. We have enjoyed the welcoming staff and remote location. The setting is lovely, but the wifi is sporadic, so that’s why there haven’t been any posts to the blog the past few days. Back to the single lane road…it is used as a two lane highway, which means driving off road when a big truck goes by.

March 5th-Suzanne has a bit of a cold and she was concerned about the effects of all the dust on her sore throat and coughing, so I went out on Safari as the only guest with the naturalist and driver. The safaris are from 6 am to 11 am in the mornings and 2:30 pm to 7 pm in the evenings. In the afternoon a couple showed up from Finland and they rode with me.  Very nice people that are fun to ride with in the park. The morning and afternoon safari’s both had good Tiger sightings, along with Indian Boar, Gazelle, Langur monkeys, Sambar and Spotted deer.  The Tiger warning sound that I added to a prior blog was a Sambar deer. The Gray Langur monkey below has a brand new baby. And the last photo in the group below is of a Changable Hawk Eagle, note the very long legs as he stands on his kill of a jungle fowl.

The park is surrounded by a buffer zone where the local people are allowed to graze their animals and cut deadwood. At 6 am when we were on our way to safari, we’ve noticed a steady stream of wild herbivores all migrating back to the safety of the park. They have spent the night out raiding the farmer’s fields of wheat, mustard and hay. In self defense the farmer’s spend the night protecting their crops while keeping watch from these little elevated huts.  This guy has evidently had a hard night. If it gets cold, the lookout builds a little fire on the ground underneath the sleeping platform to stay warm.

March 6th-Suzanne is feeling better and we are driving into a different zone of the park later today with less dust and smoother roads, so she will able to come along.  I am jealous the she was able to visit the local tribal village today while I was out of the morning safari.  No tigers today!  But lots of beautiful birds, wild boar, Gaur and even a Small Indian Civet.

These are two little 7″ green bee-eaters. 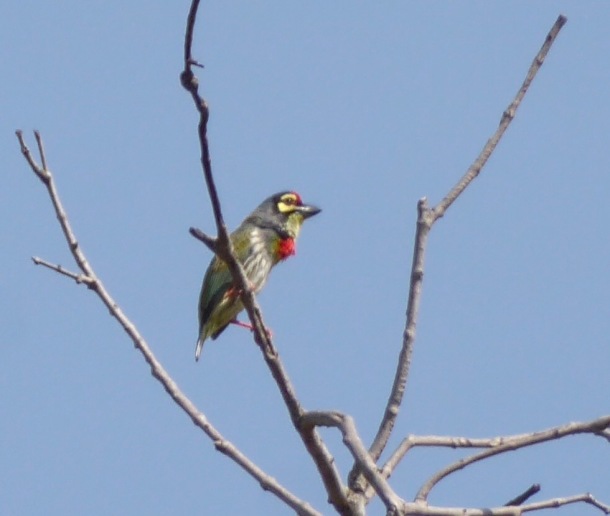 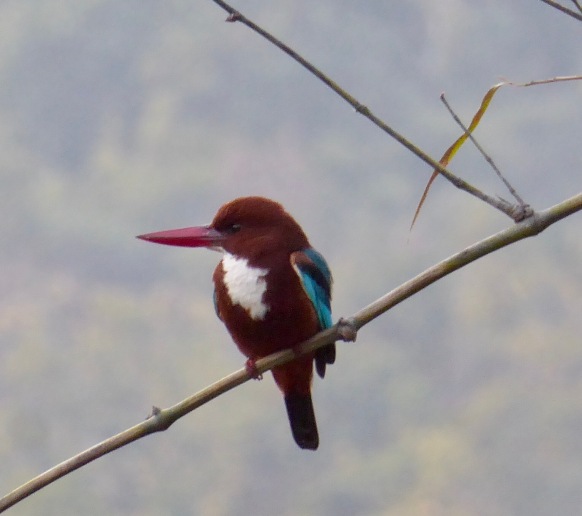 A Coppersmith Barbet and a White-throated Kingfisher. The featured photo is an Indian Roller scratching his ear.

The Gaur was jaw droppingly massive, weighing in at about 3300 pounds. This guy had muscles on muscles.

The morning safari always has a snack stop, because we leave the lodge before breakfast.  Everyone drives to ‘the center’ and stops for a potty break and food.  The local people have set up small kiosks with hot Chai tea, potato chips and other items for sale.